Today we are taking a look at equivalency. Not equivalent exposure, equivalency. What the heck is that? Equivalency is a very, very complicated subject matter, but one people have been screaming about because of the last format comparison we did.

The first thing we need to talk about in order to understand this is crop factor. And most of us are familiar with what that is.

If you go the other direction with medium format it goes the other way. So your 50mm is going to be more like a 40mm or 35mm. 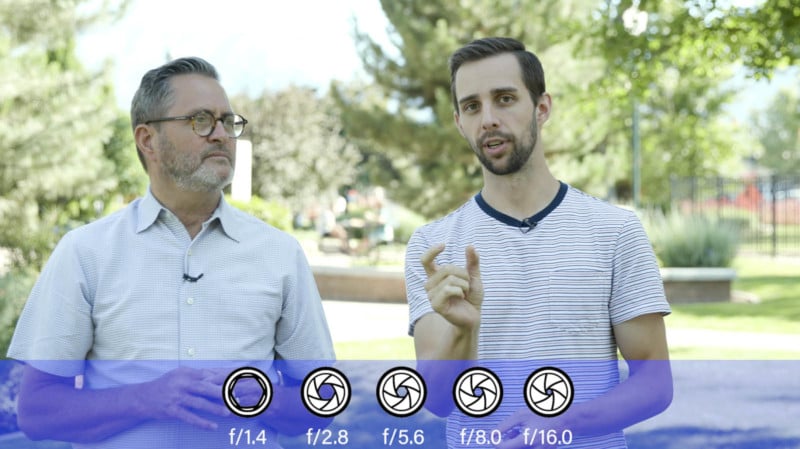 The way we calculate the diameter of that opening is actually by taking the focal length that you are shooting and dividing it by the f-number. 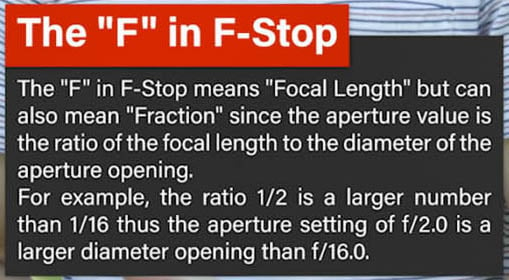 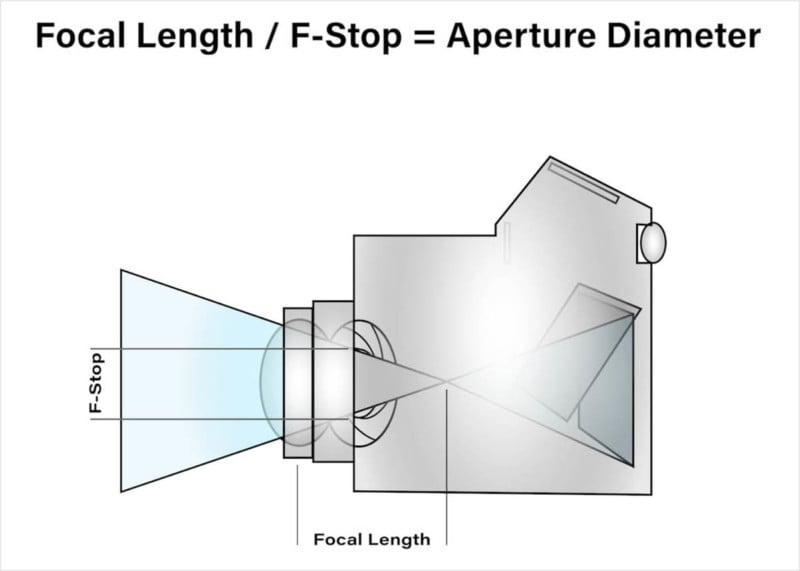 So we should start off by shooting each one of these lenses at f/2.8 and just see how different that depth of field is for each lens at f/2.8. So that gives us an idea of exactly where the depth of field builds on each of these cameras. You see it drastically. 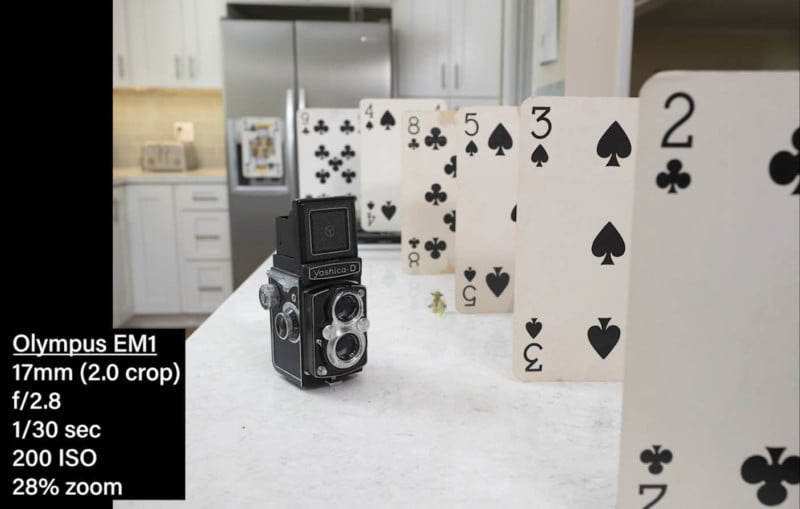 This is a Micro Four Thirds. There’s some out of focus. It’s not all sharp by any means. But the depth of field is pretty deep. 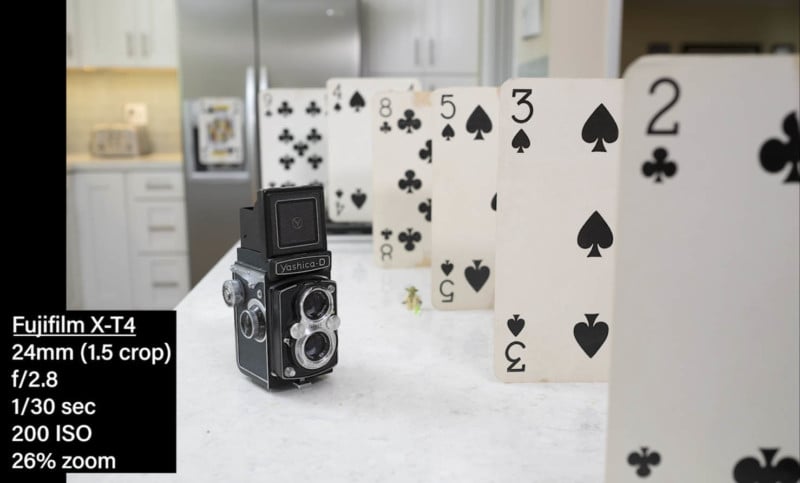 Then you go to the crop sensor, the X-T4 for a little less depth of field, not a huge jump but a little less. 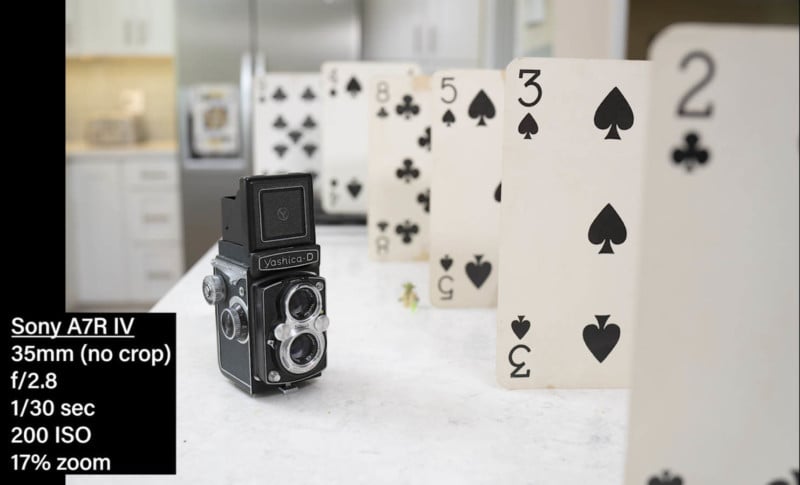 Then we go to the Sony and that’s like a big jump and then the medium format camera, not as much of a jump. 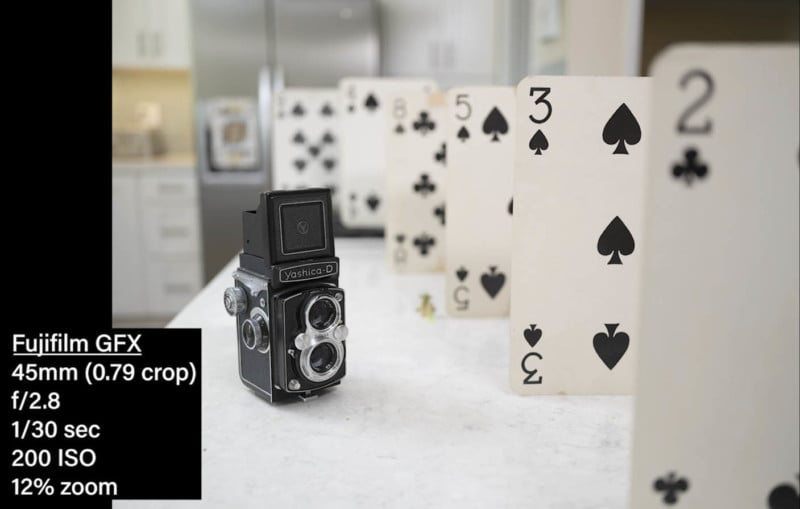 Now we’ve shot at the same aperture number on all the cameras. Let’s talk about equivalency.

Basically, for every format size you go up, you stop down one so let’s start at f/2.8 on a Micro Four Thirds camera to get the same physical aperture on our crop sensor camera APS-C camera, we just go to an f/4 and then to get the same amount of light in our full-frame camera we go to an f/5.6. And then on our medium format camera, we go to an f/8. But we have one problem here. You know what the problem is?

When you put a different aperture on every different camera you have a different exposure for every different camera. So you have to compensate that with shutter or ISO. Now we don’t want to do the shutter because again, this is equivalency. So it’s all about letting the same amount of light and if we start dragging the shutter for some of these cameras, and we’re just allowing more light in which means we’re back to where we started from with the ISO.

So in order to compensate for the smaller shutters on the larger sensor cameras, we’re going to step up the ISO. So that means if we started at 200 ISO on our Olympus, because that’s the lowest it can go, we’re going to have to shoot at 1600 ISO on our medium format camera because we’ve stopped down to an f/8. 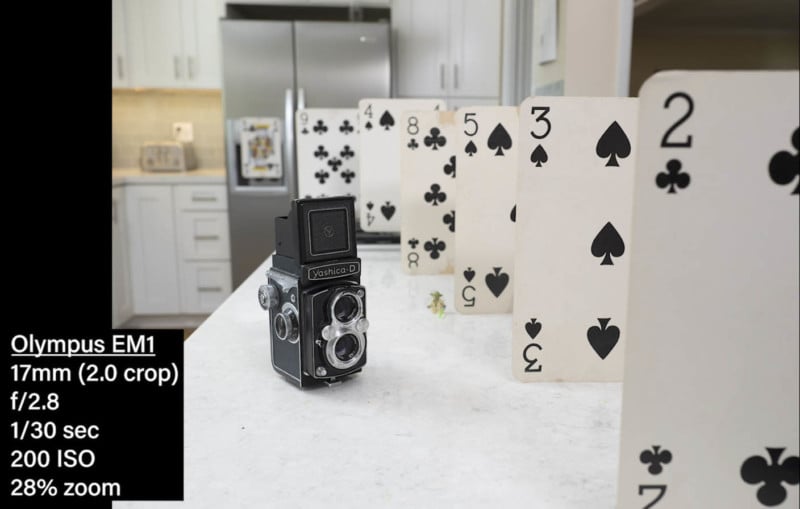 Okay, so now we’re shooting with our equivalency settings. The Olympus will be the same settings as last time it’s shooting at ISO 200 that’s the lowest it can go and an F 2.8. The shutter speeds will be the same across all the cameras. So this image should look pretty familiar. And then we go to the Fuji XT-4 and it does look pretty similar focus wise. You look at the king in the back and our focus is holding about the same from the three to the five. Yeah, very similar and this is not an f/2.8 this is f/4. So the Fuji is at an f/4. And we have basically the same field so that means we have to go to f/5.6 on the next one and that is pretty similar. If I want to nitpick this, maybe there’s a slight difference in terms of focus between the Fuji and the Sony. The Sony might be a slightly shallower depth of field. This is now at f/8 so those all look very similar. F/8 on the medium format compared to the F/2.8 on the Olympus. There is the same amount of depth of field. They do look very similar. Obviously, there’s a huge resolution difference here because the Olympus is a 20-megapixel image and the GFX is a 100-megapixel image. So you’re going to see way more detail in the GFX.

The grain structure looks way better on the GFX 100 than it does on the Olympus to me. The GFX is at 1600 ISO to compensate for the lack of light and the exposure. The Olympus is at 200 ISO and I still think that the GFX is slightly cleaner than the Olympus. Not to mention the better detail of course because you have more resolution. That’s a whole other issue, grain structure. It looks like that the GFX 100 is a much nicer grain pattern than we’re getting on the Olympus. So the equivalency exposure argument that we’re getting that we didn’t give the Micro Four Thirds a fair shake, it just doesn’t hold water to me in any way, shape or form. 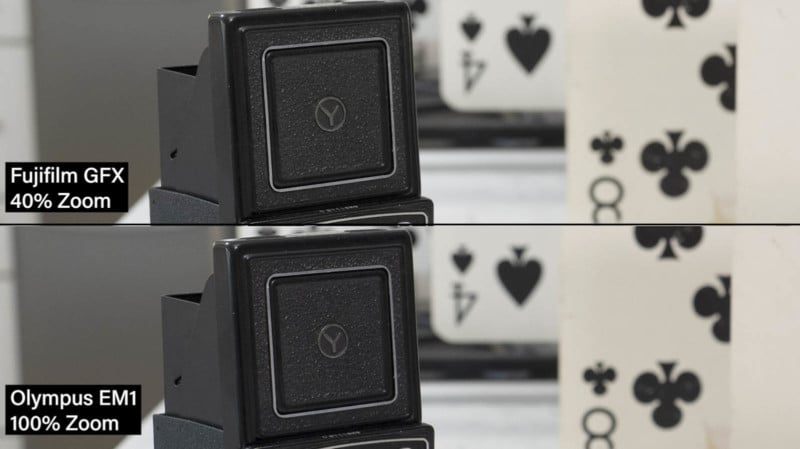 Compare it to a race car. It is like saying my go-kart doesn’t go as fast as your race car. Your race car has too many cylinders. You have to dumb it down to have the same number of cylinders as my go-kart. And now if you only drive in first gear, then the two are going to be equivalent as far as speed goes. But the reason you have a race car is because you have more cylinders, and you can drive it in another gear other than first gear. And that gives you a much nicer image. That’s basically it. I don’t understand it. It’s an argument built on the foundation of physics and not on practicality. 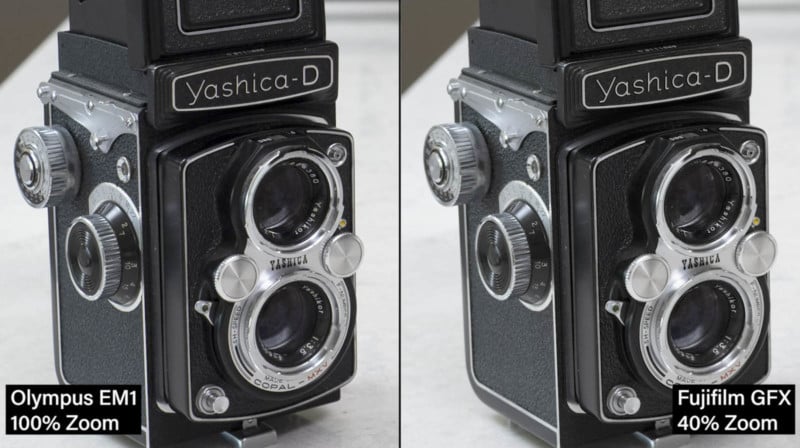 Now for film and video, I feel like it’s it has a better place a stronger place to be able to use. But still, you still have that shallow depth of field issue. I mean, you look at the Panasonic cameras, like the GH5 or the G9. They have incredible video capabilities. And they’re light and small and the batteries go forever. So there are a lot of advantages, especially in video, for Micro Four Thirds cameras. 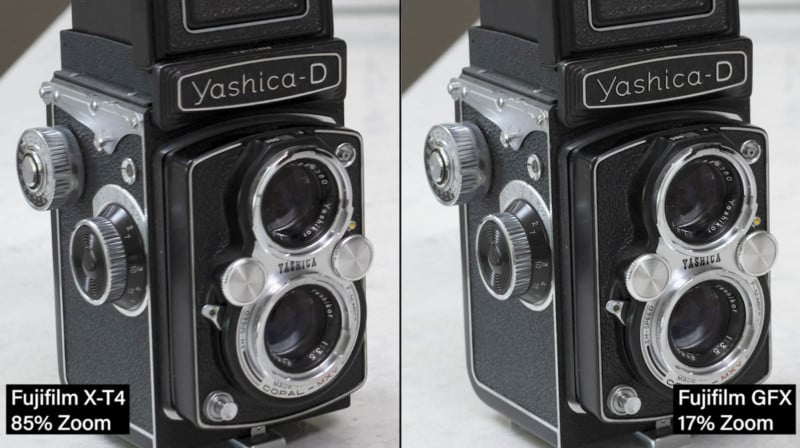 So there it is — equivalency, more geeky stuff. We just said that all equivalency nerds were all wrong. So enjoy that.

A special thanks to LensProToGo for sponsoring this video/article. Get 15% off your LensProToGo rental. Use Discount Code: SLANTEDLENS15.

About the author: Jay P. Morgan is a commercial photographer with over two decades of experience in the industry. He teaches photography through his company, The Slanted Lens, which runs a popular YouTube channel. This article was also published here.