Photographer and “time travel photographer” Patrick McNicholas has spent the last three years compiling historic images from the Tulsa Race Massacre and recreating them in the same location in the modern-day to create final photos that blend the past and present.

McNicholas says that the project, titled Tulsa Past to Present, started “by accident” in February of 2018.

“A friend and coworker was a collector of historic photos of Tulsa and he posted a historic photo on social media and in the comments posted the street view,” McNicholas tells PetaPixel. “I took both and edited them together and the project was born. I started compositing photographs of historic buildings and filming locations of movies shot here, but soon I started to get more serious.”

He says that after years of hearing about the Massacre and after he moved to Tulsa in 2014, McNicholas began researching the events that took place in 1921.

The Tulsa Race Massacre, also known as the Tulsa Race Riot, is the name of an attack that took place in 1921, where a white mob attacked residents, homes, and businesses in the predominantly Black Greenwood neighborhood of Tulsa, Oklahoma. The attack lasted 18 hours and resulted in widespread destruction of the neighborhood and numerous deaths. It is widely considered one of the worst incidents of racial violence in the history of the United States and was, up until quite recently, largely unknown. As noted by History, at the time, news reports of the massacre were suppressed despite the hundreds of people killed and thousands who were left homeless.

“These images from the tragic events always stuck with me. When I started creating these past and present photos I knew I had to do some of 1921,” he says. “I began collecting historic photos from local sources like the Tulsa Historical Society (who features my work), the University of Tulsa, Oklahoma State University, the Tulsa Library Archives, and others. Although some photographs were labeled, many were not,” McNicholas says. 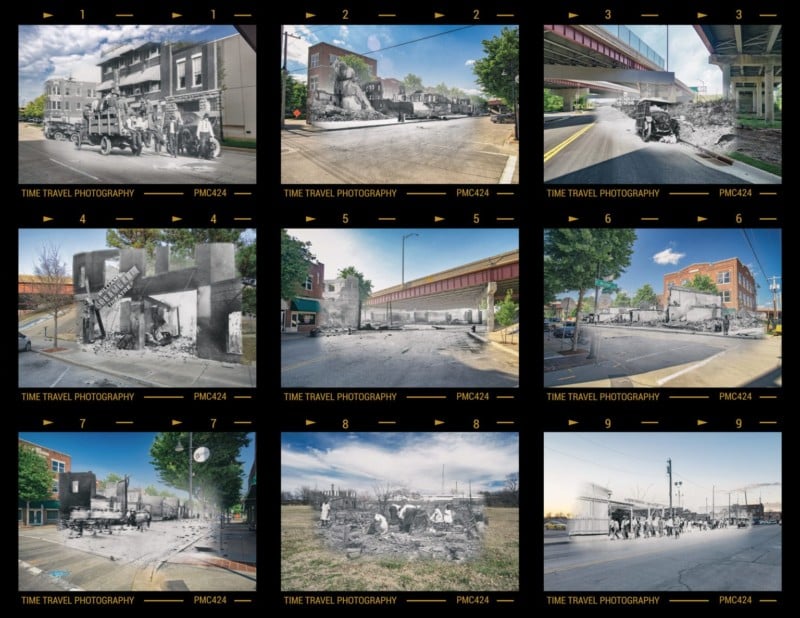 “But I started to see clues in the photographs and began creating a map of where these photographs were taken. I started taking my own photos for this project at the end of 2019.” He says that finding and recreating the scenes has not been easy.

“It has quite literally saddened me to see the extent of the destruction. These images reimagined combine both art and education to create a lasting impact. Geographic accuracy is extremely important, each photograph is precisely recreated within feet of where the original was captured. It is my goal to honor those who lost everything in the events 100 years ago as well as teach the lesson so it never happens again.”

McNicholas’s images seamlessly blend the historic photos with modern images, similarly to how photographer Shawn Clover created composite images of the San Francisco earthquake back in 2012. 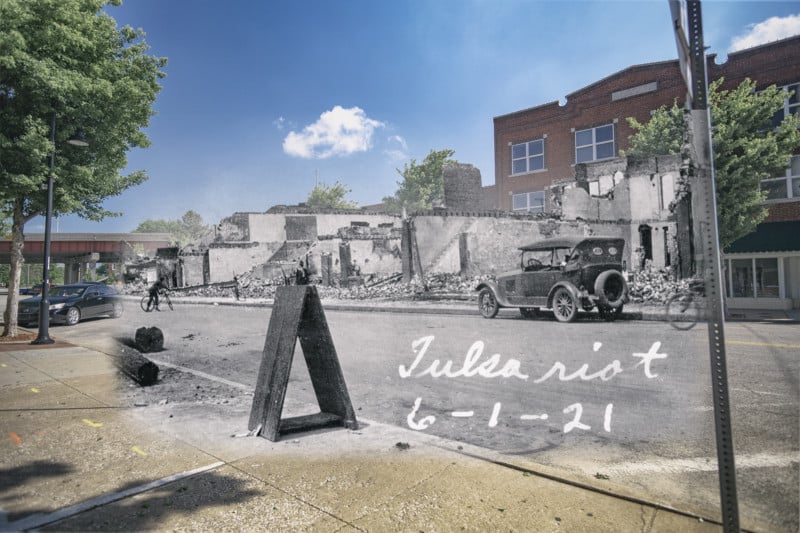 To create his photos, McNicholas says that he goes out to locations armed with the archival photos on his phone for reference, and he always shoots with a wide-angle lens to allow him more space in the frame while editing, which makes combining the images from the past with the present easier. He also always shoots his photos on cloudless or nearly cloudless days and manages exposure using neutral density filters.

“I try to match up as many details in the historic image with the present-day location,” he says. “If there is nothing physical remaining, I use histocial maps overlayed with today’s maps to estimate the locations.”

You can watch his editing process in the video below.

In addition to the finished still images, McNicholas has also created several lenticular prints to show the transition of past to present in a single print:

Tulsa Past to Present is on display in Greenwood at an exhibit located in the precise location of where the attack took place 100 years ago. You can also peruse the full series both on the project’s website as well as on McNicholas’s Instagram.

Image credits: Photos by Patrick McNicholas and used with permission.

The Limited-Edition Leica Noctilux May Have Already Doubled in Value

AI Can Now Turn You Into a Fully Digital, Realistic Talking Clone