The Royal Observatory Greenwich’s Insight Investment 2020 Astrophotographer of the Year, Nicolas Lefaudeux, has revealed his technique and the simple DIY adapter that made his award-winning image of the Andromeda galaxy possible.

As some photographers were locked in a discussion about whether or not the French optical engineer and part-time astrophotographer used Photoshop techniques or genuine photography to capture his acclaimed photo, Lefaudeux took to his personal website to share his method.

Constraints and hardware limitations forced Lefaudeux to think outside the box and work with what was available. The result? A stunning new perspective on one of our closest galactic neighbors.

“Shooting Andromeda was a consequence of having the hardware that I had,” Lefaudeux explained to me by phone from his home in France on Monday. “With the telescope I have, which is not that big, you end up with not that many potential targets. Andromeda is the first one that comes to mind… it’s a natural object to choose for it.”

Andromeda’s width would fill the field of view of his telescope. With his target in mind, he turned to creating the blur effect that would fulfill his creative vision.

Software effects like Photoshop blurring didn’t provide a satisfactory look for Lefaudeux, so he got to work fabricating an appropriate mount to connect his camera to the telescope at enough of an angle to create a tilt lens look.

With its orientation, Andromeda offers the perfect plane to try this effect, he said, and by aligning his focal plane with the galactic center, he was able to simulate a foreground and background comprised of defocused stars.

But the small diameter mount of his Sony a7S camera limited the angle with which he could create the focal plane thus constraining the depth of field.

“The bayonet [flange] is super tight… at a certain angle, you begin not to see the sensor, because the bayonet is higher than the sensor and it blocks some part of the sensor,” Lefaudeux says.

Because of Sony’s narrower mount, he saw shadows on the sensor while it was tilted away from the telescope’s eyepiece, at worst blocking the image entirely or creating a harsh vignette. Larger flanges would offer steeper angles, he said, resulting in a shallower depth of field.

The solution came with a unique, yet simple, angled camera to telescope adapter. By implementing a modest 25-degree pitch to offset the camera sensor, Lefaudeux had enough tilt to allow the line of focus to include the plane of the galaxy while creating a foreground and background of blurred out, multicolored orbs. For those who still contend that Lefaudeux used a filter, or software technique to create the effect, he offered some insight to explain why the camera technique is possible, and ultimately better than using Photoshop to emulate it.

“When you know a bit about how the effect is obtained, you understand why it [software] is not giving this effect,” he said. “The stars don’t get saturated, and when you blur them you don’t get their real brightness, they just appear darker than they appear in camera.”

“For bright, colorful bokeh you require defocus acquisition,” he said, adding that the idea is similar to lens-whacking with a cheap lens to achieve defocus. He illustrated this point on his website, where he demonstrated an attempt to create the effect in Photoshop compared with the image in question. The contrast was obvious: defocus was clearly superior. 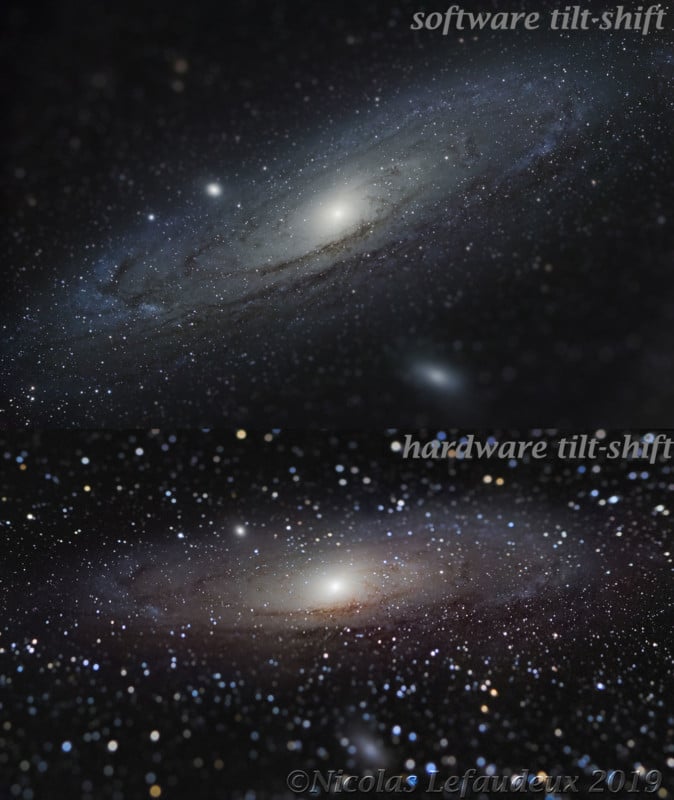 Though the idea itself seems simple enough, he added that the winning image required hundreds of long-exposure frames compiled in a stack to bring out the detail and color of the final shot.

Lefaudeux’s technique and final image were enough to earn him the title of Astrophotographer of the Year and net him a cash award of £10,000 (~$12,800). Asked what he intended to do with the prize money he offered only a neutral reply, “It opens possibilities…” he said.

Expect to see Lefaudeux chasing eclipses around the world once travel restrictions begin to lift, and keep up with his work at his website.

If you’re interested in hearing my conversation with Lefaudeux in its entirety, you can listen to Episode 3 of my photography podcast The Image File.

You can also read Lefaudeux’s blog post to find out more about the technical details of this DIY adapter and how he created the winning photo.

About the author: Chris Koehn is a former newspaper journalist turned videographer. With independent documentary and corporate video production experience, Chris helped newsrooms adopt video content strategies as media convergence and DSLR film making transformed the online news landscape. His video work earned nominations and national news awards in Canada for election coverage. Chris is now working in independent journalism and documentary while freelancing for Canadian news outlets. You can connect with him on Twitter.

Image credits: Photographs by Nicolas Lefaudeux and used with permission

There is No Delay in EOS R5 Shipments