In the 1880s, photographer William Jennings set out to prove that lightning was a far more varied and volatile thing than a simple zig zag in the sky. After some trial and error, he ultimately succeeded, capturing what is often shared online as “the world’s first photograph of lightning.”

The story of Jennings’ achievement begins with painting. According to a 1939 article in Popular Science, the photographer set out to photograph lightning with his 4×5 plate camera because he was suspicious that “lightning bolts were not of the zig-zag form pictured by artists.”

Jennings’ first few attempts failed because the photographic emulsions of the time weren’t sensitive enough, but about one year after his first go, he got lucky.

“Jennings refused to be discouraged, however, and a year later a pioneer film maker, John Carbutt, produced a superior emulsion and supplied the experimenter with a boxful,” reads the Pop Sci piece. “During a thunderstorm on a September evening in 1882, Jennings made his first successful lightning picture.”

That picture—considered by many to be the first “proper” photograph of lightning—was made famous on September 5th, 1885 when the magazine Scientific American published several of Jennings’ lightning photos, prompting local newspapers to declare him the first to capture the phenomenon on camera: 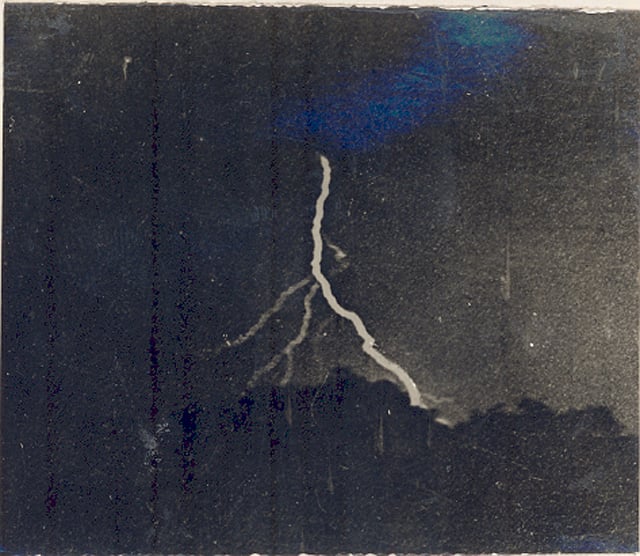 We put “proper” in quotes above for a reason though, because this achievement doesn’t technically belong to Jennings. The first photograph of lightning may have actually been taken in 1847 by Thomas Martin Easterly using the Daguerreotype process.

You can see his photo, titled A Streak of Lightning, below:

Easterly’s original plate, however, has been lost leaving Jennings’ image as the first “surviving” image that we have, and certainly a more coherent one.

Jennings also went on to capture several more photographs of lightning throughout the 1880 and 1890s, helping to establish the fact that no two lightning bolts are quite the same… and none look like a perfectly formed zig-zag.

To dive a bit deeper into the history of lightning photography, check out this detailed article in The Journal of the Association of Historians of American Art. And if you want to see some other “World’s First” photographs, read the story behind the world’s first underwater portrait, or check out the (much more recent) world’s first photo of a black hole.

Should You Buy a Used Camera?

A Real-World Review from Vietnam