The U.S. Chamber of Commerce is the most powerful trade organization in the world. It spends hundreds of millions of dollars each year to influence the actions of government, and prides itself on its many members. It advocates for what it considers to be pro-business policies. But does the Chamber always represent the interest of all its members?

When it comes to climate change and congressional campaigns, the answer is an indisputable no.

Despite strong calls for climate action from U.S. businesses, the Chamber’s 2019 Annual Scorecard does not take climate action into account. This results in a celebration of “climate deniers.”

While U.S. companies are stepping up in record numbers to set emissions-reduction targets for their internal operations, congressional action remains a critical missing ingredient in achieving strong climate action in the United States. One reason is that corporate actions have not always translated to responsible policy advocacy.

For example, a recent article highlighted five companies that undermined their verbal support for climate policy by donating — via their corporate political action committees (PACs) — to politicians that actively blocked such policies. These companies are just five of numerous examples, but PAC donations and direct fundraising are not the only or the most important ways that company spending influences elections.

Many companies also belong to trade associations, which are uniquely positioned to exert political influence. As two experts put it, “The privileged relationships established between trade associations and government have provided private industry with an unprecedented level of access to government.” The Chamber of Commerce is the biggest such trade association in the United States and has tremendous influence over which candidates wind up in office. As a recipient of corporate money via membership fees, trade associations’ funding choices reflect on member companies.

Companies can, and should, be looking closely at who their trade groups are supporting and whether those candidates will advance climate action. The AAA Leadership Framework, developed by WRI and nine other organizations, challenges companies to adopt a science-based climate policy agenda, including by holding trade associations accountable for their policy positions and support for political candidates.

How is the US Chamber of Commerce Channeling the Voices of its Corporate Members on Climate Change?

In 2019, the “voice of business” — the U.S. Chamber of Commerce — did something noteworthy. It updated its climate policy position statement. The Chamber publicly acknowledged the threat of anthropogenic climate change and stated: “inaction is not an option.” This was a major shift for an association that has been famously credited with killing the Clean Power Plan and influencing President Donald Trump’s decision to withdraw the United States from the Paris Agreement.

So how might those words translate to action, particularly when it comes to allocating funds to candidates in 2020? The answer lies in part with the Chamber’s “How They Voted” scorecard.

This scorecard looks at how each member of Congress has aligned with the Chamber on its priority issues throughout the year. Issues are communicated via letters to Capitol Hill calling on congressional members to support, oppose and/or sponsor specific legislation. Congressional members whose scorecard performance is at least 70% aligned, meaning that they conformed to the Chamber’s asks at least 70% of the time, receive the Chamber’s Spirit of Enterprise award. Receipt of the award communicates the support of the Chamber, generally influences the Chamber’s election endorsements, and connects to how the Chamber funds political candidates.

Also in 2019, the Chamber decided to overhaul the scorecard to incentivize bipartisanship and leadership. It was a response to growing criticism over a history of largely partisan, conservative funding outcomes. Given that the Chamber says it is committed to action on climate change, this update to the scorecard could also be an opportunity to support Congress members with a positive voting record on climate policy.

This is not to say that there is a causal relationship between being a “climate denier” and an individual’s standing on the Chamber’s scorecard; there are a multitude of factors that need to be considered. But the analysis does reveal a concerning reality that must be addressed.

Companies committed to climate action may want to ask themselves if the Chamber is wielding its political influence in a way that truly serves their priorities and their reputation — particularly if they value climate action. 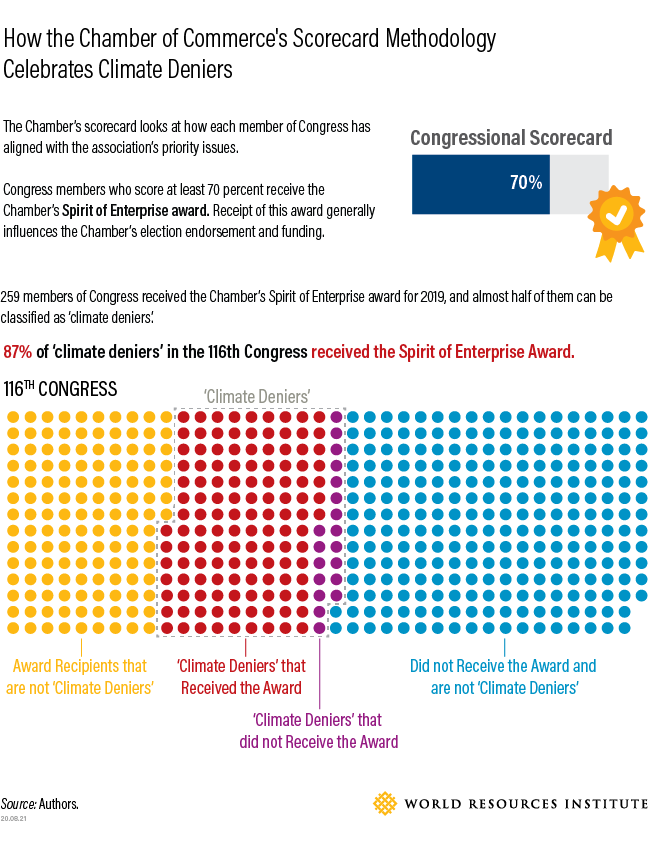 The fact that those not acknowledging the reality of climate change could score so highly on the Chamber’s scorecard demonstrates that the content of the 2019 scorecard itself is not taking climate action into account. This comes down to methodology.

Because the Chamber is such a prolific funder of political campaigns, the outcome of the scorecard directly affects who is elected to Congress. Failure to account for climate change in the scorecard — and the resulting high scores (and ostensibly, funding/endorsement) for so many “climate deniers” — is likely to elongate the careers of those who perpetuate a culture of climate change denial. This leads to, and is used to excuse, a lack of bipartisan climate action on Capitol Hill. The Chamber is working against its own stated desire for bipartisan climate action in Congress.

The Chamber expressed support for the United States remaining in the Paris Agreement, acknowledged the important role of the power of business in addressing climate change, and noted the importance of bipartisan climate change solutions. These actions made headlines, but are undermined by some of the Chamber’s choices, including the content of its scorecard and subsequent participation in campaigns for candidates that fail to recognize climate action. This means that the Chamber’s members, many of which support climate action, are perhaps unknowingly spending money in opposition of their interests and publicly stated climate commitments.

We propose three options to begin addressing this discrepancy:

First, both the Chamber and its members should begin tracking how its actions on non-climate issues have an impact on climate action. Knowing that a pattern is playing out is the first step to making a change. Reporting and acknowledging that pattern would be an added bonus.

Secondly, within the bounds of its current methodology, the Chamber should be more proactive in ensuring that climate-friendly legislation is included in its scorecard AND, importantly, that anti-climate votes are not rewarded.

Of course, inclusion of one or even two climate-friendly bills may not be enough to significantly shift congressmembers’ scores in a way that would remove climate oppositional candidates from the coveted 70% threshold. Therefore, a third option is for the Chamber to devise a climate litmus test and apply it to all campaign financing decisions. The Chamber could continue to give the Spirit of Enterprise award to whomever best represents its diverse interests, while also declining to spend companies’ money on candidates who have proven to be dead ends on climate change. A move like this would rapidly work to ensure that Congress is filled with the bipartisan climate champions the Chamber supposedly supports. We understand this might be an unprecedented move for the Chamber, but so is the challenge of climate change.

The Chamber has a long way to go, and it is not alone. Although we did not cover it here, other trade associations also play a role in election outcomes. With the U.S. elections fast approaching, it is essential that companies examine the pathways of their political giving now.

If the Chamber is serious about its climate commitments, it should develop its scorecard accordingly. If its members are serious about their own climate targets, they should ensure the trade associations they participate in uplift the voices of climate champions in Congress.

World Resources Institute is a global research organization that spans more than 50 countries, with offices in Brazil, China, Europe, India, Indonesia, and the United States. Our more than 450 experts and staff work closely with leaders to turn big ideas into action to sustain our natural resources—the foundation of economic opportunity and human well-being. Find out more at www.wri.org

Help Fight For A Strong Clean Energy Future — Via A Tesla Raffle!