As 2020 proceeds through COVID-19, hurricane season, and a major election for the US and the world, it’s worth looking at how we have arrived where we are in these fractious political times. The lens I will use are campaign platforms in the US and Canada among the political parties which receive more than a tiny fraction of the vote. The data and visualizations are all from the Manifesto Project, a long-running research program out of the EU which assesses campaign platforms of parties in democracies around the world along several axes.

The environmental policy axis is interesting, and shows up at the end of the article. It might surprise some people.

First, a bit more on the Manifesto Project. It is an EU-funded research program. When I’ve used its results elsewhere, at least one American commenter took that as a sign that they were by definition unreliable, which I considered very revealing about the American. The program’s work has come under criticism for methodology, even in peer-reviewed studies. However, the Manifesto Project team addresses the criticisms in their published piece,  The ‘Paradox of the Manifestos’ — Satisfied Users, Critical Methodologists. I find their arguments compelling, but I also consider that peer-reviewed critiques are compelling evidence of their authority as well. Having read one of the critiques, what I found was that they thought the assessment could be better, not that it wasn’t good.

Let’s start with the pure left-right divide, summarized up to a single metric by the team.

This is Canada in the 2015 election on an aggregated right-left policies basis across all parties. Trust me, this leads back to the US.

Canada is a multi-party country, which means that every party can stake out whatever position it wants. Notice that party in the upper right hand corner trending away from all the other parties? That would be the Conservative Party of Canada. For a sense of where they are politically, you could review my piece on their current leadership race specifically related to their climate policies, or my Quora assessment of their campaign platform entering the 2019 federal election.

In 2019 — analysis by Manifesto Project not compiled yet — all of those lower-left parties received two-thirds of the vote. The Conservatives continued to become more regressive and picked up only a third of the vote. The Conservatives, despite being highly differentiated from the rest of the political parties, are merely the Official Opposition and the Liberals are able to pass legislation with support from one of two other parties on the center-left, the NDP or Bloc Quebecois. This is the same chart from the US. The Democratic Party picked up almost 3 million more of the popular vote with an unmotivated voter base, while the Republican Party continued steaming to the right with a highly motivated base. The 42% approval rating of Donald Trump per FiveThirtyEight maps nicely to this.

Note that the Republicans moved slightly right in 2016 to an even more extreme position. If you look at the axes, the Republican starting position was further right than the Democratic Party’s end position was to the left. The assessment doesn’t show how a country governs, but the overt nationalism, adulation of authoritarian dictators, suppression of protests, and walking away from international treaties suggests that the Trump Administration is governing to the right of the campaign, meaning that arrow progress upward and away. 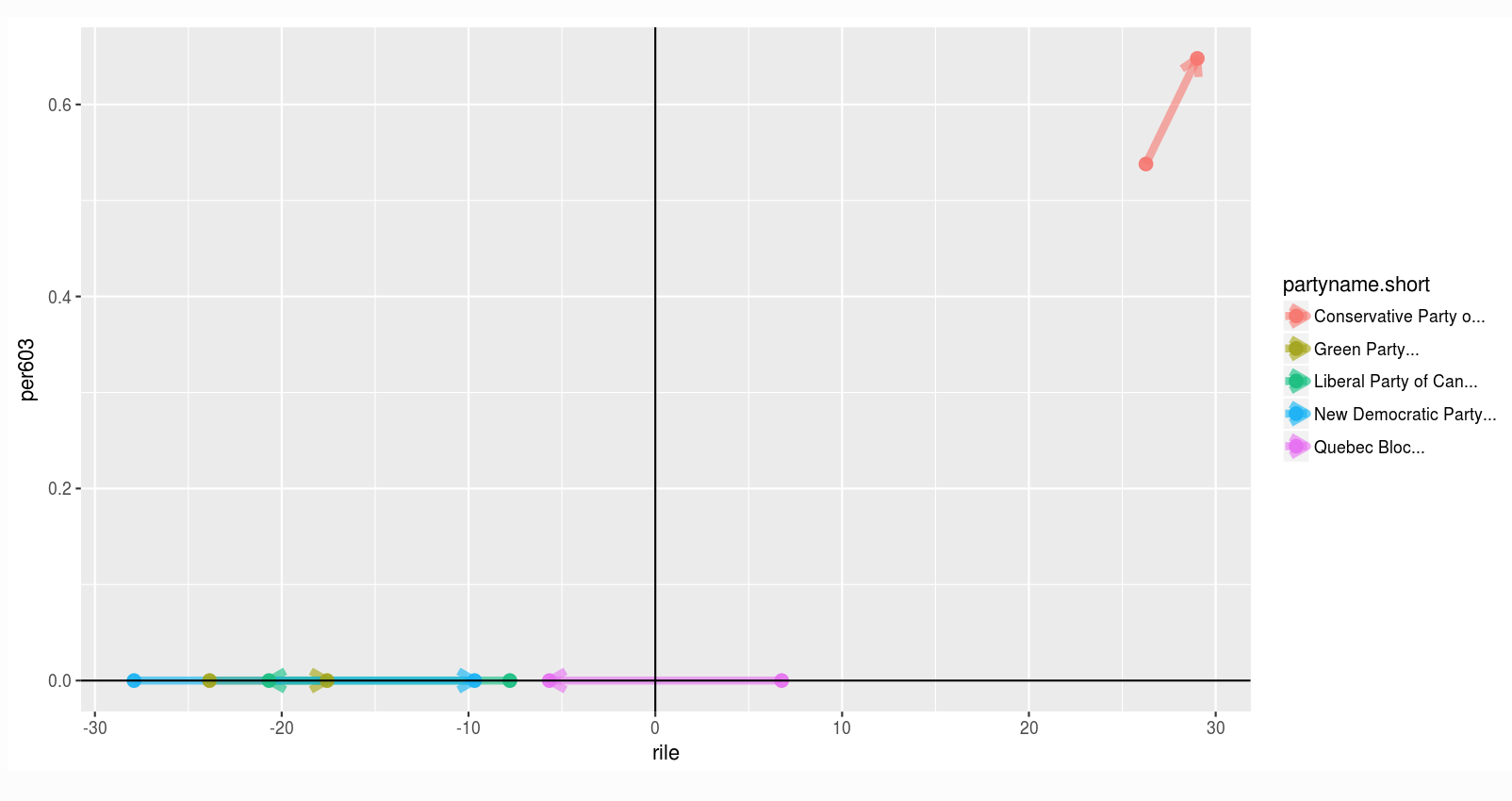 This is Canada on espousing ‘traditional morality’. It doesn’t register for Canadian parties. They are all at neutral, not negative, with a variety of differentiators about how they provide support for all Canadians. Except for one party. Guess which one. Yes, the Conservatives once again steamed further from the majority of Canadians into an even stronger social conservative stance than they had previously had. Here’s the same chart from the US. Note that Democratic Party policies trended to neutral, not negative. Where did the Republicans go? Similarly to their northern counterpart, they trended further into social conservatism. Environmental protection policies of political parties in US. Image courtesy of the Manifesto Project.

These charts are of the environmental protection axes. Note that the Democratic Party is in the same quadrant as the vast majority of Canada, while the Republicans are in the same place as the minority in Canada. It is interesting that per Manifesto Project’s assessment, the Republicans actually increased slightly in a positive focus on the environment between the 2012 and 2016 elections. Given that Trump campaigned on exiting the Paris Accord and climate change being a Chinese hoax, this is a rather stunning indictment of Mitt Romney’s campaign. Romney is, however, on the bipartisan Climate Solutions Caucus, as I pointed out in my recent piece on where the Republicans might head after the Blue wave.

Chart after chart between countries show the same pattern. The majority of the populace is keeping up. An aging minority is falling behind and hates it. An increasing divide as seen through the lens of political parties’ campaign platforms, a primary indicator of what their polling and strategy tells them will gain them votes.

There’s a global trend. There are a bunch of left-behinds who are pining for the 1950s as seen through the lens of 1980s reruns of old US TV shows. You know, when white Christian men had all the power and influence, women did what they were told, and blacks and homosexuals were ridiculed if they showed up at all. Many Republicans are showing up in the Republican Voters Against Trump clips expressing a desire to be inclusive, to be part of this century and to protect the environment. The Republican Party isn’t listening to them.

Conservative parties have a choice. After the McCain and Romney losses to Obama, they studied their problem and realized that they had to tack to the center-right, into the 21st Century, and start appealing to young people and people of color. And both parties obviously failed to do that. Trump managed to eke out a win with 107,000 votes in three swing states with a rather incredible set of circumstances that allowed that. Those circumstances are missing this year, and so the likelihood of a Blue Oval Office, House, and Senate are high.

When will these increasingly isolated and narrowly based conservative parties learn the lesson of demographics and broaden their tents again? Hopefully soon. The world needs the US especially to have a useful conservative voice at the table in policy discussions, a voice that accepts empirical reality but has a different perspective on the appropriate mix of policy measures to address it. Right now, the Republicans are missing in action, and Canada’s Conservatives aren’t much better.