Roger Cicala and the team at Lensrentals recently decided to do a proper heat emission test on the Canon EOS R5. After all the debates in the comments, amateur teardowns published to Weibo, and a whole lot of speculation, LR wanted to answer a basic question well: how does heat get out of this camera… or does it at all?

If you had to sum up 2020 camera industry news in a tag cloud, “EOS R5 Overheating” would be an obnoxiously large item. But if you haven’t gotten abjectly sick of hearing about it just yet, this is one test that’s probably worth considering.

You can see the full test and read all of Roger’s thoughts at this link, but we’ve summarized a few of the key points below.

Firstly, measuring heat with an infrared thermometer while the back of the camera is off is all-but-useless. That much should be obvious. So Roger and his team did all their testing with the camera fully assembled, meticulously measuring the temperature at various points on the camera right after it overheated and shut down.

They also tested the shell of the camera separately to see if it conducts heat well (spoiler: it doesn’t).

What they found is that the camera mostly conducts heat out to the heat sinks that they identified in yesterday’s teardown, and then down to the base-plate. The top of the camera doesn’t get very hot at all, and while the back does get hot, it’s significantly less hot than the internal temperature measurements (based on the temp sensor reading) so cooling down any part of the outside of the camera is unlikely to do much good for the internals.

The other interesting bit to mention is that the hottest part of the camera when recording 8K was the CFx memory card. The card and slot approached 60°C, which likely means that the internals around it were even hotter. This also applies to the ports on the main board, which all got really toasty.

Roger tested firmware version 1.0, then ran the test again on the latest firmware version 1.1, and it’s the card slot that suffered the biggest spike in temperature in order to allow for the extra ~5 minutes of record time that Canon’s latest update just bought its users.

You can see some thermal images of these bits below: 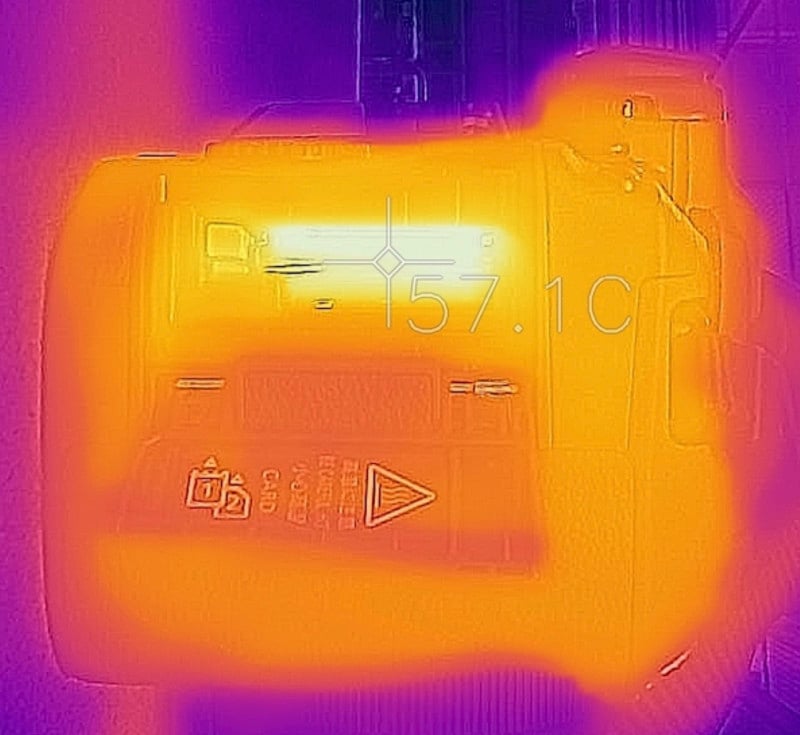 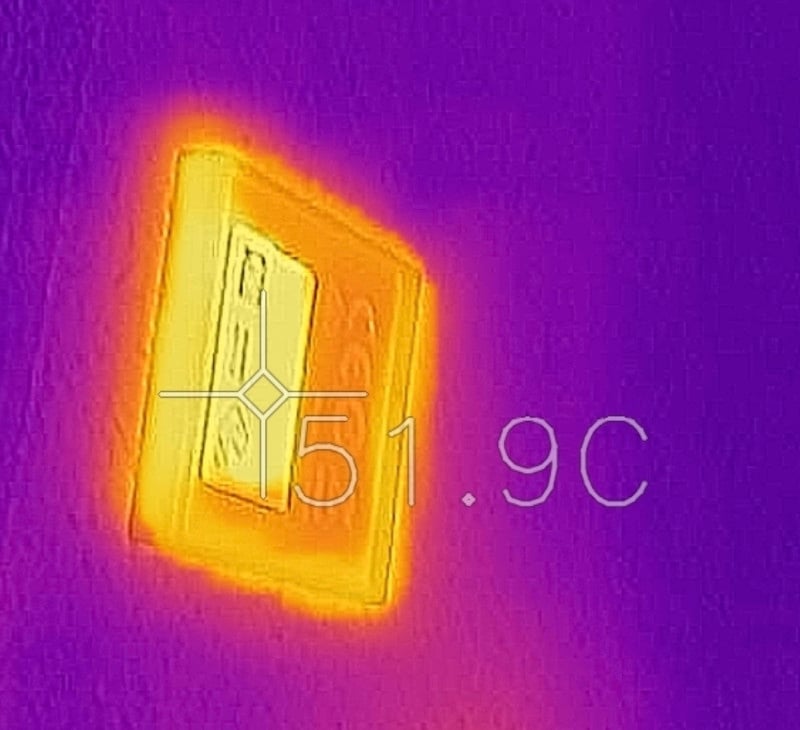 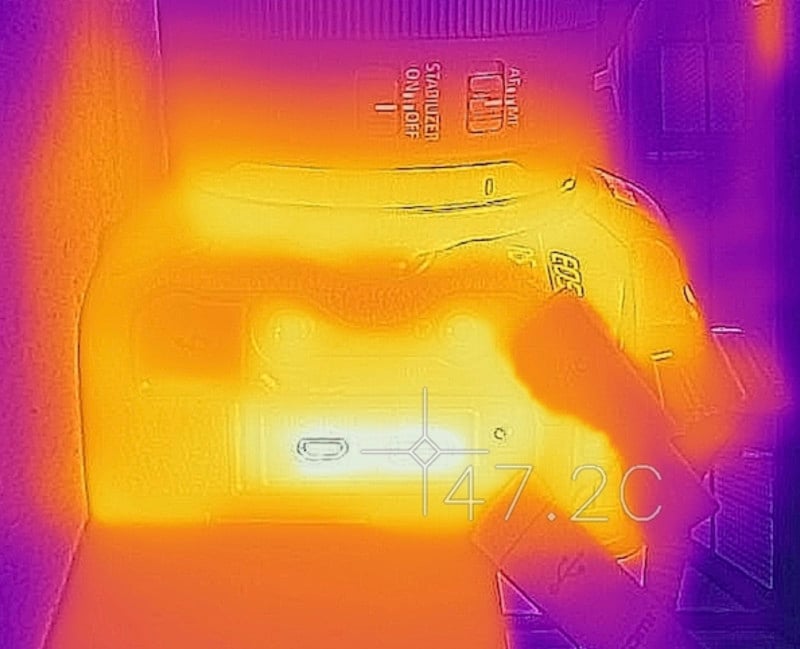 All of this is important to consider because 60°C is approaching an important operating temp cut off for some of the chips inside. As Roger explains in his conclusion:

I am NOT a chip guy, but according to their FAQ, the Toshiba voltage converting chips have a suggested maximum operating temp of 60°C before they dramatically lose efficiency, and less efficiency means generating more heat. The CFx card slot was at 57°C and the internal temperature sensor at 61° C when things shut down. That could be a coincidence but may suggest Canon doesn’t think getting the inside much over 60° C is a good idea. I don’t know, but I’m a conservative guy by nature, so my personal decision is I’d prefer not to get the inside much hotter than that.

It comes down to priorities. Stills camera engineers have been working on making “light, strong, weather-resistant” cameras for 15 years; this is the first camera to try and cram 8K video capability into that same chassis; you can fill in the rest with your imagination. 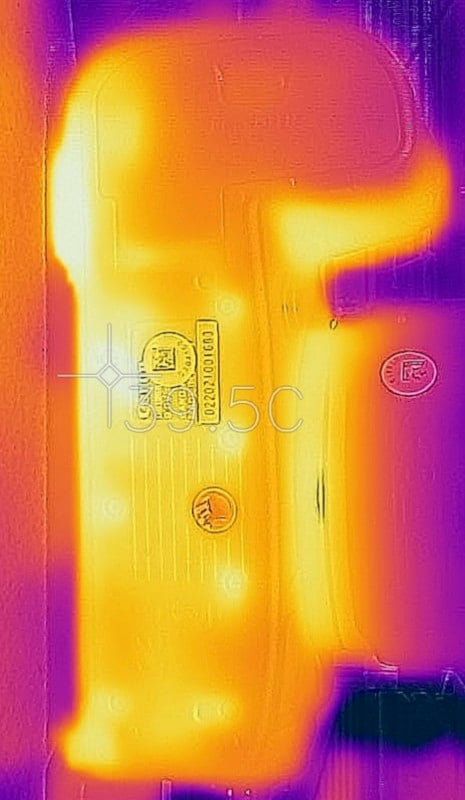 As we’ve said in previous coverage of the overheating “issues” and the “hacks” that get around the built-in firmware timer, the existence of a timer that can be re-set does not necessarily mean that Canon is purposely holding this camera back. Bypassing the timer—i.e. tricking the R5 into running longer than it’s intended to—could have real consequences if things inside are getting too hot on a regular basis.

To learn a lot more, and read a bit of informed speculation to boot, head over to Lensrentals and read Roger’s full screed on the matter. There’s some top notch heat testing, some interesting cooling ideas, and a bit of speculation in there just for fun.

Image credits: All photos by Roger Cicala/Lensrentals and used with permission.

A Tiny Tool for Color Matching and Coordination

Former Federal Reserve Chair Janet Yellen was confirmed as treasury secretary Monday, with the Senate voting 84-15 to make her

As Wall Street dollars flow into green energy, what’s next for the oil industry?

Godiva to close all 128 chocolate stores in North America, citing decline in shoppers due to pandemic