Whenever Canon comes out with new cameras, one of my most important real-world tests is determining how clean the images look at higher ISOs. I am not testing this for scientific reasons, I am doing this test because I shoot in low light quite often and want the highest quality images for my clients. I also thought that you and the rest of the world might be interested in this as well.

Editor’s note: This article was originally published on photographer Jeff Cable’s blog and has been syndicated with permission.

Many people get caught up in the number of megapixels that a camera has on its sensor, thinking that the more the better. What people may not know is that the more megapixels they cram onto a sensor, and the closer that those pixels are to each other, the more heat build-up occurs. This increase in heat can ultimately also increase the digital noise (graininess) in our photos.

If we all took photos exclusively outdoors and in bright light, this would not be a concern. But in normal times (not during this pandemic), I spend my weekends photographing in dark temples and churches and even darker party venues. This means that my cameras are usually set at a minimum of ISO 2000 and I sometimes have to raise the ISO as high as ISO 10,000.

For this reason, I was anxious to test the new Canon R5 and Canon R6 mirrorless cameras to see how they perform in low light. And to give me even more insight, I decided to put them to the test against the reigning top Canon DSLR bodies, the Canon 1D X Mark III and the Canon 5D Mark IV.

In order to try and keep everything as consistent as possible, I put together a plan to use as much of the same hardware as possible. Since I had the RF adaptor in my possession, I decided to use the Canon 70-200mm 2.8 L lens which could then be mounted to my DSLR cameras and the new mirrorless cameras (using the adaptor). I mounted the Canon 70-200mm lens onto my Gitzo tripod, zoomed it to 200mm, and pointed the lens at a dark object in my office (which turned out to be a black NFL helmet in my collection).

I printed small cards to put in each shot to make it easier to see which camera and ISO level I was shooting in that particular photo. One by one, I would mount each camera, work my way through the different ISO levels, and then switch to the next camera body.

Once done with the entire procedure, I came across some really weird results. But before we get to that, let’s look at the noise levels for each camera.

I zoomed into each image to approximately the same spot (varying for the different resolutions). Not surprisingly, each camera delivered great results at ISO 100, with excellent clarity and very little digital noise.

The good news is that, even at the higher ISOs (like 6400 and 12,800), the results were very good. Regardless of the camera used, the resulting images from those high ISOs would clearly be good enough for most clients.

If we zoom in and look at the photos, we can clearly see that we are losing detail in the image, but unless these images were printed very big, it would be hard to see this.

But when we zoom in, this is where we see the biggest difference in ISO performance between not only the Canon R5 and Canon R6, but also the Canon 1D X Mark III and Canon 5D Mark IV.

Amazingly, the Canon R6 outperformed all the other cameras, and in a very noticeable way. The R6 image not only retained much more detail than the other three cameras but also showed much less noise in the lighter and darker areas.

Here is a closer look at the digital noise for the R5 and R6:

I figured that the Canon R6 would outperform the Canon R5 in this ISO test, but was not expecting this $2,500 camera to best the $6,500 Canon 1D X Mark III by such a wide margin. And here is another thing that puzzles me: If the Canon R6 uses the same sensor and same processor as the Canon 1D X Mark III, why are the ISO results so much better in the Canon R6? I have written to my contacts at Canon to get an answer to this. Stay tuned…

I think that the Canon R6 might be my choice for shooting weddings and bar mitzvah. I do not need 45 Megapixels for my clients and I prefer to have 20 Megapixels and the cleanest image possible. I also know that, with the in-camera stabilization, I may not need to crank up the ISO quite as high with the Canon R5 and Canon R6.

I know that, with the smaller images size that you see here in the blog post, you may not be able to see the details I am talking about. For this reason, I created a Dropbox folder for you all, so that you can download the full-res RAW images to see them for yourself.

So… what were the strange results that I mentioned earlier? After shooting all the images and comparing the metadata, I saw a wide discrepancy in the shutter speeds for each camera. They were all set for the same ISO, same aperture, and pointing at the same subject through the same lens. Why were the shutter speeds so different? Here are the comparisons:

Shooting in AV mode at ISO 100 and an aperture of f/8, here is what I saw for shutter speeds:

Shooting in AV mode at ISO 6400 and an aperture of f/8, here is what I saw for shutter speeds:

I wrote all this down and stared at the results, trying to figure out how the shutter speeds could vary so much. With the lower ISO, the Canon R5 and Canon R6 had shutter speeds that were nearly twice as fast as the older DSLR cameras! And at a higher ISO, the numbers (now the same for the new mirrorless cameras and the same for the DSLR cameras), the shutter speeds for the mirrorless cameras were still much faster than the DSLR cameras. I know, from previous conversations with the technical people at Canon, that different cameras with different sensors will yield slightly different results. But these showed a lot more variance than I would expect.

It wasn’t until I looked more closely at the images that I saw what was happening. 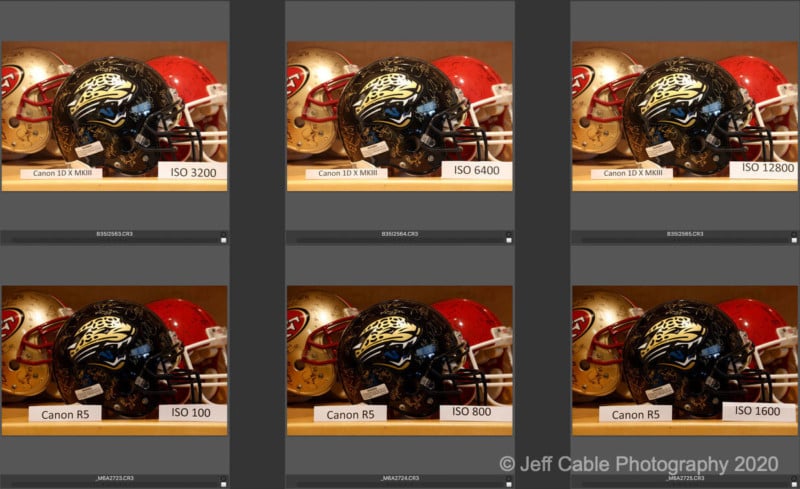 Now, the big question is… which camera was metering the scene more accurately. I opened the image from the 1D X Mark III in Adobe Photoshop and hit the “Auto” button to see what it would suggest for an optimum histogram, and it wanted to add +.23 of exposure. When doing the same thing to the R5 image, Photoshop wanted to add +.84 of exposure. (It is for this reason that I lightened some of the R5 and R6 images in the examples above.)

That may come across as technical mumbo jumbo, but the fact is this. I am OK with the exposure captured by the mirrorless cameras, since it gives me a slightly faster shutter speed, and therefore a better chance of having a sharp image. I know I can make the adjustments to the exposure later in post-production.

Here is my thought process at this point: I think I would like to shoot events with the Canon R6 and lean towards the Canon R5 for capturing images on my photo tours. The reason for this is simple, when shooting events, I am almost always in dark environments and don’t need more than 20MP. When photographing wildlife in Africa, Costa Rica, or other locations, we are usually shooting outdoors in bright light, and I would love to have 45MP of data in those images, for those times when I need to crop in to see a faraway subject.

As I write this last paragraph, I got an email that the Canon R6 is now in stock. I placed my order for that camera immediately.

About the author: Jeff Cable is a photographer based in the San Francisco Bay Area. You can find more of his work on his website, Facebook, and Instagram. This article was originally published on Cable’s blog.