I wrote about Tesla’s massive battery growth plans earlier today. I think I’ve finally digested ~30% of the plan. Leaving out all of the expected technological advances, the growth forecast is enormous. It’s sending shockwaves through the industry as players across the lithium-ion battery ecosystem recalibrate. That link above explores how Tesla’s newly revealed plans fit into Benchmark Mineral Intelligence’s 2030 battery forecasts. I recommend the full piece, but a short version of the story is as follows: 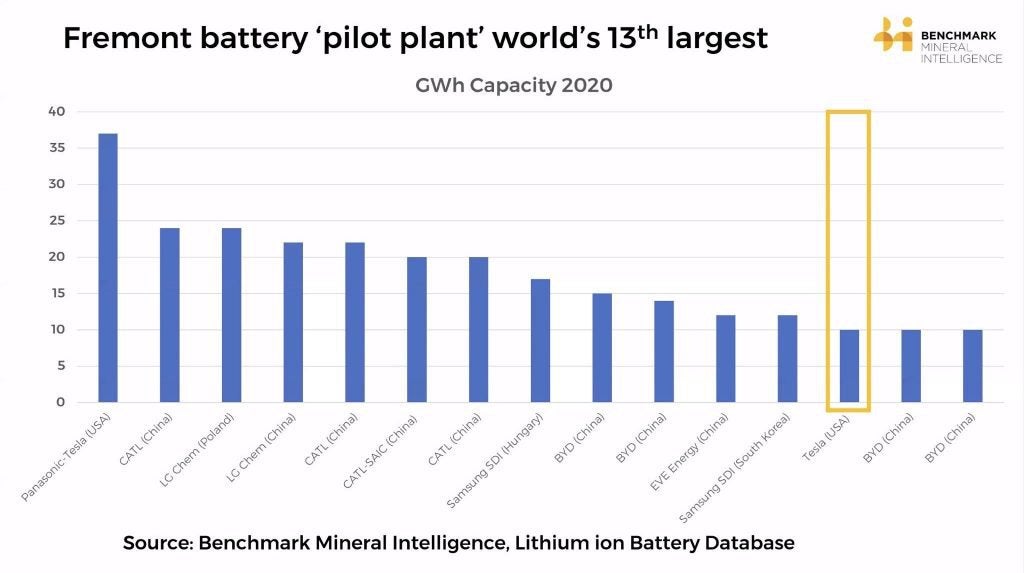 LG Chem has long been one of the 2 or 3 biggest lithium-ion battery producers in the world — CATL and Panasonic (due to its agreement with high-selling Tesla) are the other two big ones in recent years.

Incidentally, LG Chem’s biggest battery factory, the 3rd biggest battery factory in the world, is practically in my backyard in Wrocław, Poland — and a manager there was one of the first drivers in our Tesla Shuttle network. Benchmark sees that battery plant producing nearly 25 GWh of batteries in 2020 and rising to 67 GWh a year by 2029.

What about overall expectations for the company’s battery production growth, particularly in light of Tesla’s plans?

“Benchmark Mineral Intelligence August 2020 data shows a total of 262GWh of cell capacity by 2029 from its seven battery plants,” the company writes. That Wrocław factory is second in carrying the company forward. The biggest LG Chem battery factory by 2029 is expected to be LG Chem’s first Chinese Li-ion battery factory, Nanjing 1, which Benchmark thinks will grow to a production capacity of 85 GWh by 2029. That would make it about twice as large as Tesla/Panasonic Gigafactory 1 in Nevada is right now in terms of battery cell production, and that Tesla/Panasonic plant is by far the biggest battery cell factory in the world in 2020.

“LG Chem is also expanding its global capacity footprint via a second megafactory in Nanjing, China, its plant in Holland, Michigan, USA and and joint venture in China with automaker Geely.”

LG Chem’s factory with GM in Lordstown, Michigan, is expected to reach a production capacity of 30 GWh by 2029. I reported at the end of July that this factory is starting to sprout up. It is where GM’s new “Ultium” batteries will be produced. The average pack size from that factory is expected to be 75 GWh, which means they could power 400,000 electric vehicles.

LG Chem may not have a dramatic Battery Day in which it lays out an innovative, mind-blowing 10 year plan, but you can be sure it is working hard to remain a/the leader in the lithium-ion production market. It will keep bringing down costs while scaling up production, perhaps using some of the same means as Tesla, perhaps some different ones.

Also noteworthy: LG Chem has been making good money on its batteries lately, even in the hellscape that is 2020. (Much thanks for that is thanks to Europe’s relatively strong automobile CO2 emission policy, and that policy is only getting stronger.) In the second quarter of 2020, LG Chem scored $352 in profits, up handsomely from $70 million in the second quarter of 2019.

The EV battery business has gotten so big and complicated for LG Chem that it is reportedly on the verge of spinning off its EV battery business in order to raise money to help scale up production faster. The company is accustomed to seizing the day.

“The company has relied on speed, scale and geographical diversity in its global assault on dominating the EV market,” Benchmark writes. “LG Chem were one of the first movers in both aggressively scaling capacity and planning multiple battery megafactories or gigafactory(ies) across the world.”

Indeed — LG Chem has been more bullish and more aggressive than others when it comes to the transition to electric vehicles. Hence the reason almost every automaker and their mother has a contract with LG Chem for batteries.

LG Chem is pretty tightlipped, but I’ll see if we can find out in the coming weeks how the battery company has changed in the past year as European EV sales have exploded, as Tesla Model Y production has ramped up while Model 3 production and sales have increased dramatically in China, and as Tesla’s new production plans have multiplied and gotten much closer to more high-volume vehicles, especially a coming Cyber truck and Semi.

Natural Gas Is Not All It’s Fracked Up To Be