The title of this post is actually an understatement. If I were to factor in the money I actually made in image sales from photos taken with my Canon EF 200-400mm f/4L IS USM Extender 1.4x, it wouldn’t have cost me anything at all. It would have made me a great deal of money.

But that’s not what we’re talking about here. In this instance, I’m purely talking about the difference in the price I paid for that lens when I purchased it new (from an authorized Canon dealer in Canada), and the price I subsequently sold it for recently on the second-hand market.

Yes, I sold it for a mere $400 less than I paid for it, to a very happy buyer, having used it for several years to make some of my all-time favorite images. 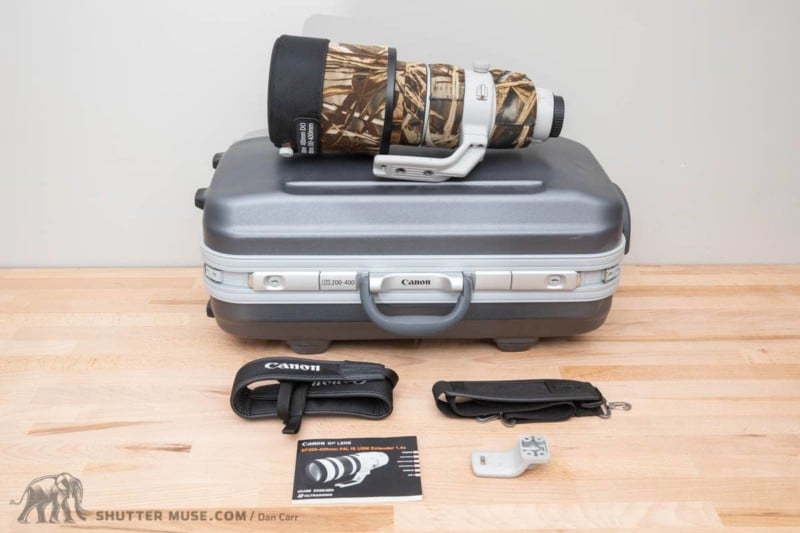 If you ever buy a lens this expensive, at least a few of your friends will probably tell you you’re crazy. Most people who aren’t seasoned photographers just look at equipment purchases as money that is spent and gone forever.

I don’t think that way at all. Large purchases are assets for my business. Much of that value is still there in my business, even if it’s no longer in cash. If you’re careful, you can minimize your losses, or maybe even profit from your purchases.

There are a number of factors that come into play with the recent lens sale I’m using for this example, so I’ll discuss them all individually:

Canon CPS (here are links for US, Canada, and Europe) membership benefits vary from country to country, but to my knowledge there are at least some membership levels in all countries that offer the CPS service, which include a discount on pro-level equipment purchases (L-Series lenses, 1D and 5D series camera bodies).

To my knowledge, it’s not a set percentage for all items, but in the case of my Canon 200-400mm lens, the discount was significant. The retail price for the lens when I bought it was $12,000, but the price to CPS Platinum members was $10,400.

Right off the bat, I’ve saved $1600 simply for having a membership that has an annual fee of only $250 (in Canada). Pretty good, right? If you’re looking at buying a Canon super-telephoto lens, or a 1-Series camera body and you’re not a Canon CPS member then quite frankly you’re mad.

Above a certain dollar value of purchase, it’s clearly worth it for the potential savings, and that doesn’t even factor in all the service benefits of having the membership, and the ability to test-drive equipment for free.

Since the launch of the Canon 200-400mm lens, the Canadian retail price has increased steadily from $12,000 to $16,079 at the time of writing this article. That is a pretty crazy price increase in about four years!

These price increases haven’t been across the board though. In fact, prices for consumer lenses have dropped in response to increased competition from third-party lens manufacturers such as Sigma, and entry-level full-frame cameras like the mirrorless EOS RP are cheaper than ever. 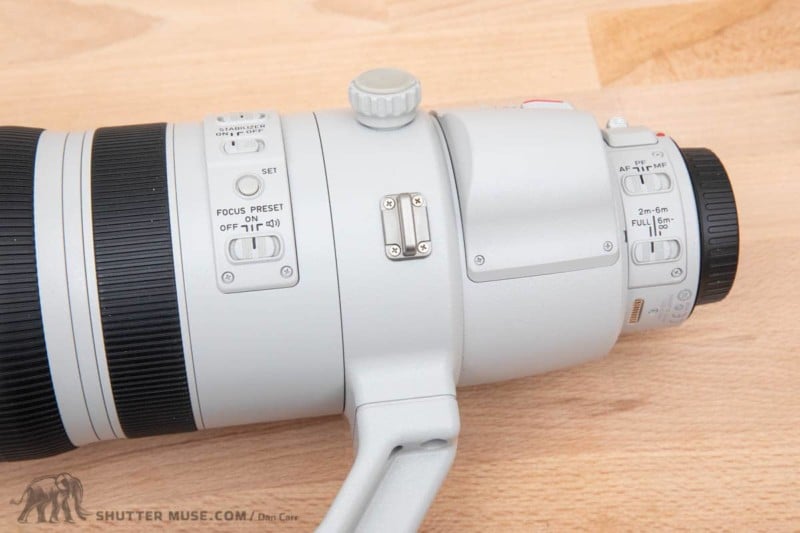 At the top end of the product lines though, prices have increased for lenses and top-of-the-line DSLR bodies. Perhaps this is in response to falling profits in the consumer sector, and falling sales in the professional sector as publications continue to lay off swathes of photographers. Development costs, therefore, need to be split between fewer sales of this high-end equipment. Certainly, economic factors came into play as well, with the yen’s fluctuating value.

Whatever the cause was, prices increased, and those increases were higher for super-telephoto lenses like the 200-400mm. My guess is that this trend will continue for these kinds of professional products.

The other thing I did was to take damn good care of the lens, and this contributes hugely to the resale value of big-ticket items like super-telephoto lenses. If you still have all the original manuals and straps, even better!

You’d be forgiven for thinking that the photos in this article are of the lens on the day I bought it, but these are actually the photos I sent to the eventual buyer when I sold it. Looks pretty good right? 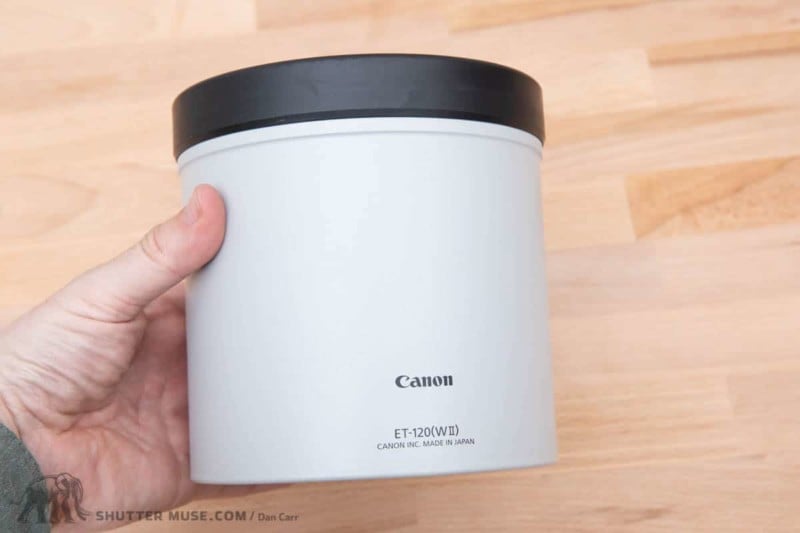 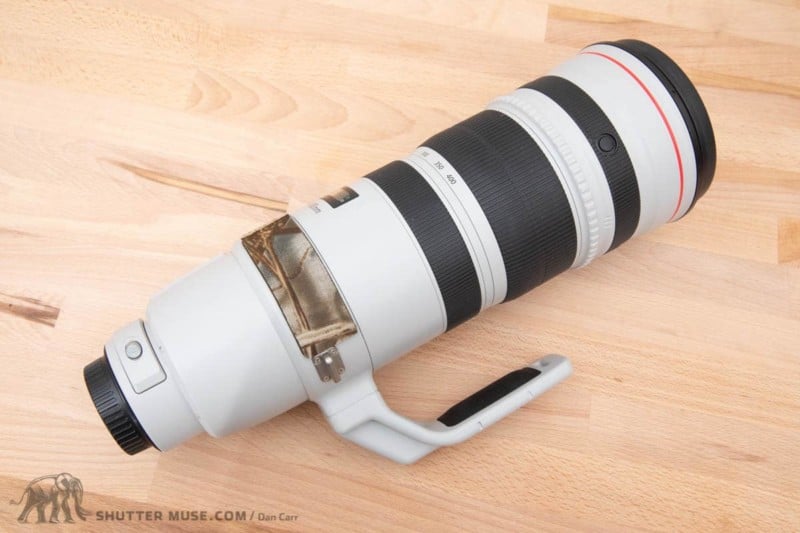 Since day 1 I used a LensCoat lens cover on it to protect most of the barrel from scratches, and particularly the lens hood which is even more prone to paint loss (and cost $700 to replace!). I also used a Really Right Stuff replacement foot on the lens, and the original lens foot was put away in a box and never used. When I travelled, it was wrapped even further in a LensCoat TravelCoat and then packed into one of my heavily padded MindShift Gear backpacks, like the BackLight Elite 45.

Think about it. When you put a big lens like this down on the ground, or even on a table, which parts of it make contact first? It’s the lens hood and the lens foot! Protecting those is a really simple way to keep your lens looking loved, and getting a higher price when it’s time to sell.

Another factor that kept the lens value high was the scarcity of this lens. The buyer told me he found three lenses of this type for sale in Canada, and Canada is a pretty big place! Whenever there is scarcity, pricing will remain high. And for those of you thinking that maybe I overcharged the buyer, he told me that at least one of those other second-hand versions available in Canada was priced higher than mine.

And let’s not forget that my lens cost him over $6,500 less than what he would have paid to get a brand new one. Everyone walked away from this sale very happy.

Of course this scarcity factor means that you are not likely to have this kind of success by investing in standard lenses like a EF 24-70mm f/2.8L. There will be hundreds of those available on the second-hand market at any one time, and that will drive the price down. Generally speaking, the higher the ticket price on the item in the first place, the scarcer it will be.

The Canon 200-400mm hasn’t been updated to a Mark II version since I bought it. I suspect there will never be an EF 200-40mm Mark II as Canon looks to develop the new RF lens format moving forwards.

Whenever Canon launches a new version of a lens, it inevitably puts a dent in the resale value of older versions as the market gets flooded with people selling the old one to upgrade to the new one. Perhaps “flooded” is a slight exaggeration when it comes to 5-figure super-telephoto lenses, but it definitely does increase the number that is on the market. Lens predictions are very hard, but if you’re planning to sell a big piece of equipment it does pay to have some idea of the current state of Canon’s development plans.

Throughout my career, I have always invested in Canon’s L-series lenses and found them to hold their value very well if you take care of them. That said, when I spent this much money on the 200-400mm in the first place I did expect to end up losing a lot more money on it.

In other words, it’s not a solid business plan to make the assumption that you can buy such expensive equipment new and take such a small loss on it over time. Plan for the worst, and then it’ll be a nice surprise for you if things work out the way they did for me.

By taking into account some of the things I mentioned in this article, though, I hope it will give you a slightly better chance at minimizing those losses! I’ve even heard of a few people making a profit when it comes time to sell big white super-telephoto lenses.

P.S. Why did I sell it? Because I moved to Sony. You can read my reasoning behind that switch from Canon to Sony here.

About the author: Dan Carr is a commercial, editorial, and fine art photographer based in Canada. The opinions expressed in this article are solely those of the author. Carr runs the website Shutter Muse, where he shares his knowledge and passion for photography. You can find more of his work on his website, Facebook, Twitter, and Instagram. This article was also published here.

4 Reasons Not to Switch Camera Systems