Several examples of the height of concealed camera technology are set to go up for auction on February 13 as part of the first and most comprehensive offering of rare artifacts ever assembled from the Cold War era. Many of the items come straight from the KGB museum in New York.

According to Julien’s Auctions, the entire collection from the KGB Espionage Museum — which you can read more about here — will be up for sale, marking the world’s largest collection of KGB-specific spy equipment and authentic KGB artifacts from the Cold War ever presented at auction.

Of those items are several cigarette pack hidden cameras like the ones below: 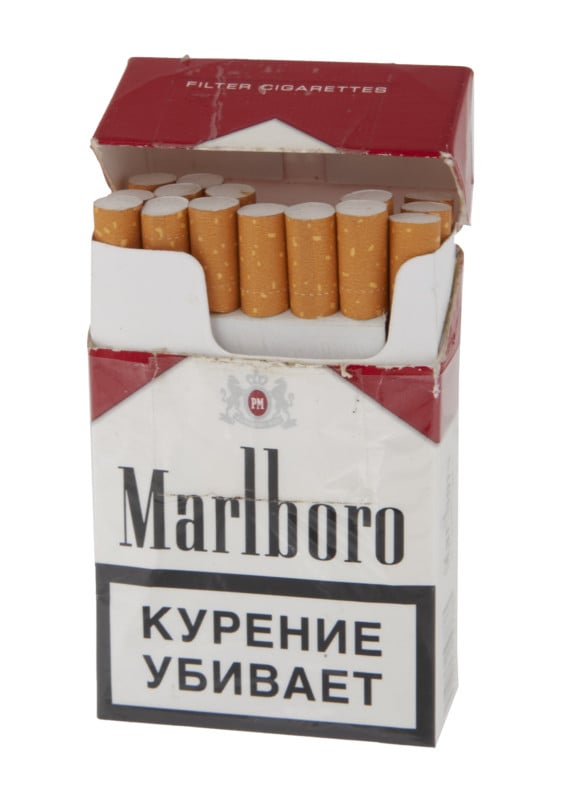 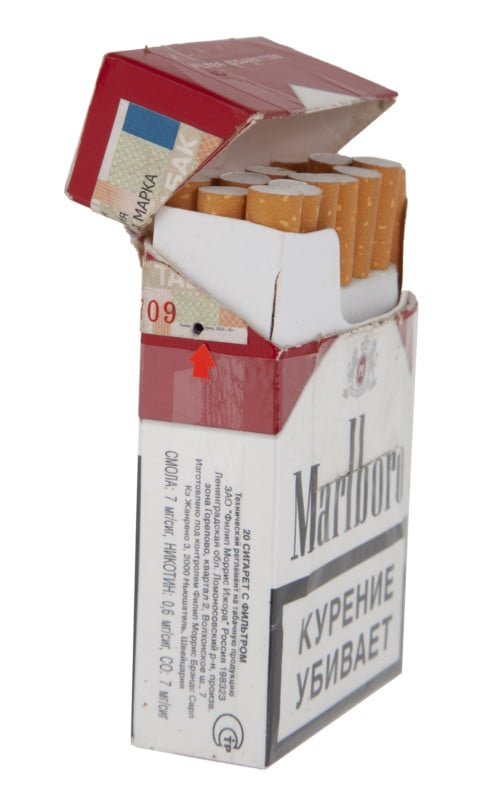 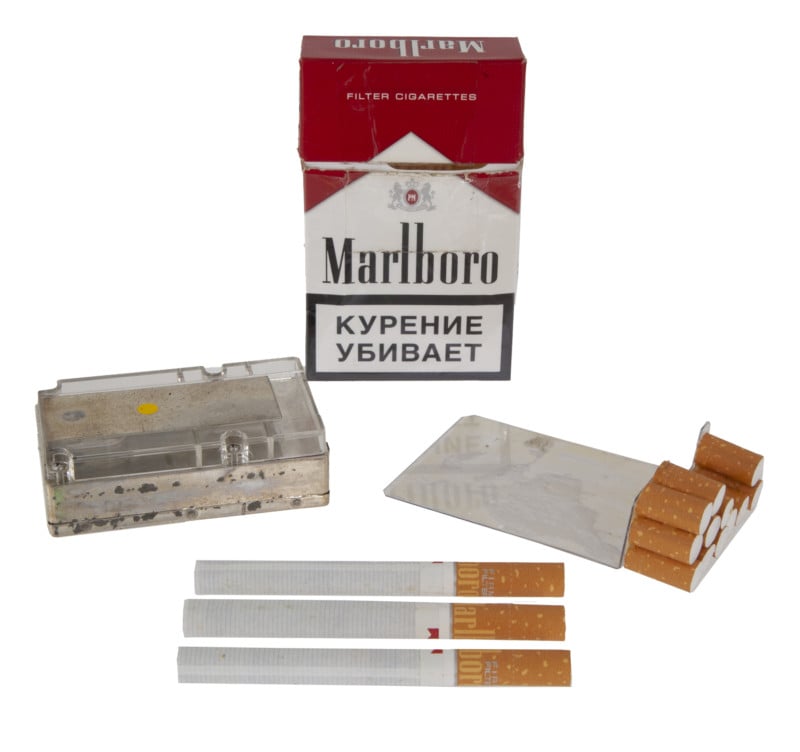 This first example is a Russian FSB spy pack of Marlboro brand cigarettes which actually contains a hidden digital camera with the lens operating through a small hole on the side.

Below is a Soviet KGB spy pack of Holiday brand cigarettes which contains a hidden camera with a lens that operates through a small grill on the side of the pack. 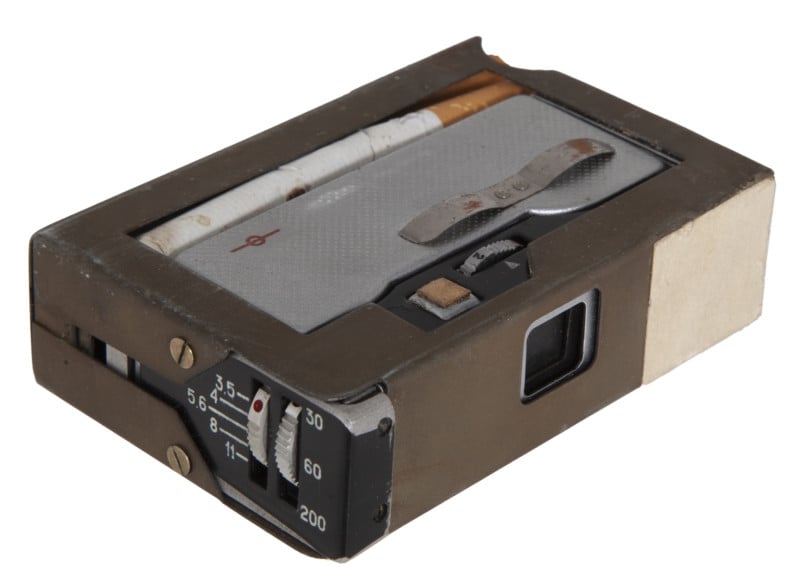 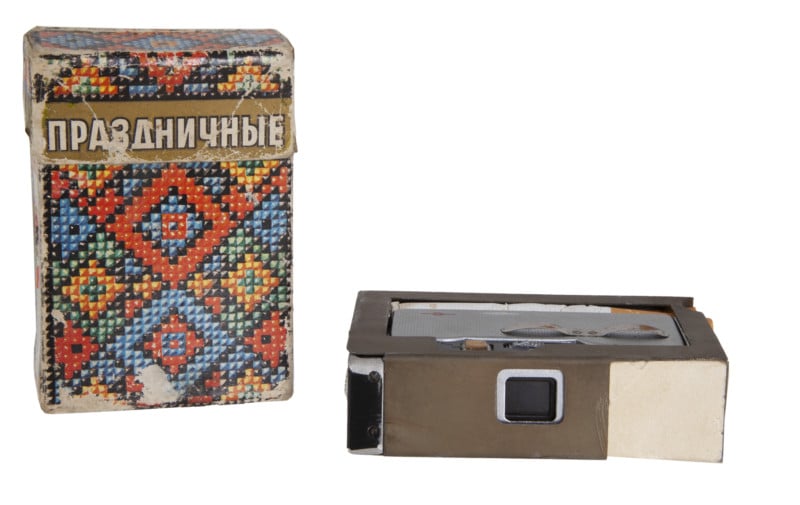 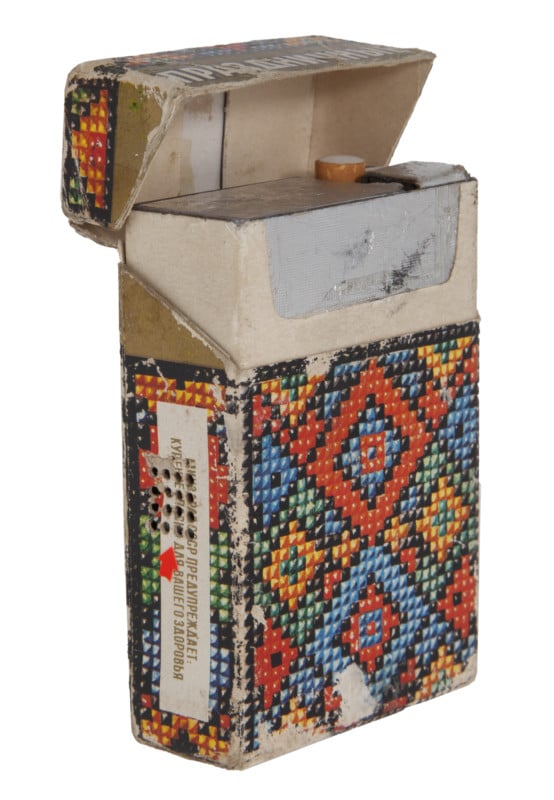 These are examples of a “subminiature spy camera.” The Kiev Arsenal factory produced civilian cameras KIEV-VEGA and in one secret factory’s division, according to the KGB’s order, the cameras were adapted as if they were cigarette packs. The principle of the camera is copied from the MINOX camera. During the Soviet period, smoking was possible pretty much everywhere: in the subway, on buses, in restaurants, in the streets, in hospitals, you name it, so agents were able to take photos relatively easily with these disguised cameras.

Moving the cigarette up prepped the camera and pushing the cigarette back pushed the launcher button and the picture was taken. On the side of the pack there was a place left for real cigarettes, and in the presence of targets, agents were able to take out a cigarette without raising suspicion. As this camera became widely popular, its design was implemented across various brands of cigarettes, flashlights, notebooks, and into women’s cosmetic boxes. The Malboro pack in particular is equipped with a modern digital camera. 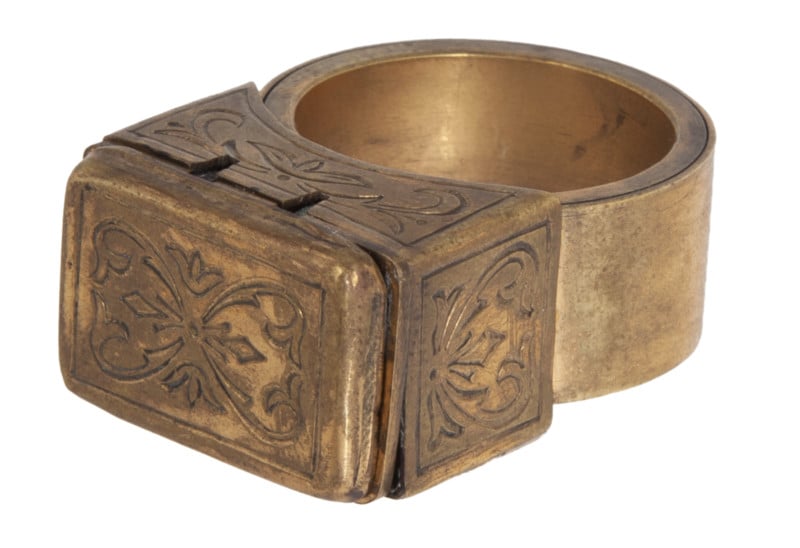 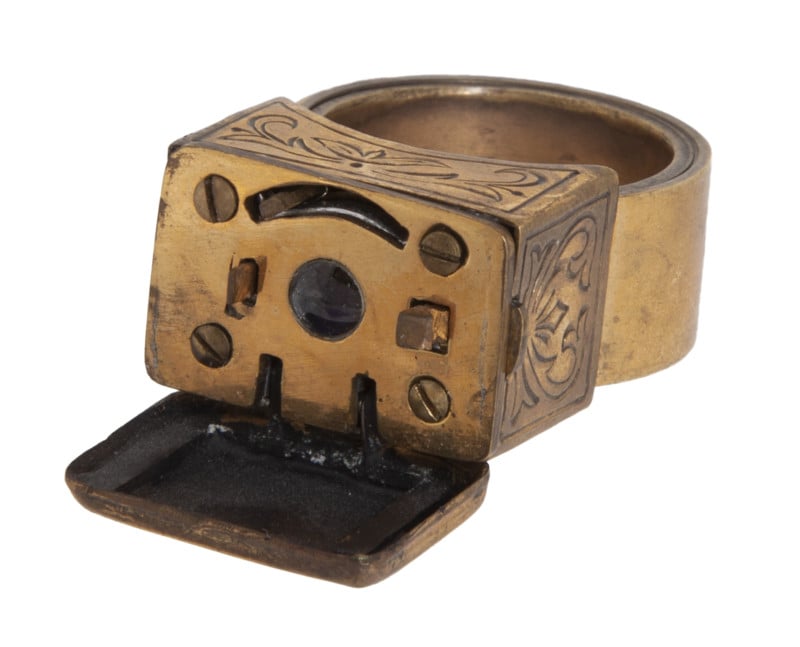 Getting even smaller is the Soviet KGB spy ring that contains a hidden camera. This particular piece is a very rare miniature gold-plated ring camera. Used for spy purposes and discrete picture taking, this ring uses film around the finger and used a single-speed, single diaphragm, fixed focus “high definition lens.” Only a few of these cameras have ever been discovered, each with a slightly different design.

The top cover of this particular ring opens up and uncovers the lens, and according to the description, it was only able to take one shot, so agents had no margin for error. To use it, an agent had to keep their hand completely still while pointed at his subject in order to get a usable image. To do so without being discovered was particularly challenging.

Next is another spy camera, this one hidden beneath clothes with the lens poking through a fake button. The operator used a shutter release mechanism that would be hidden in the folds of the coat, while the lens of the camera pointed out from that transparent button. 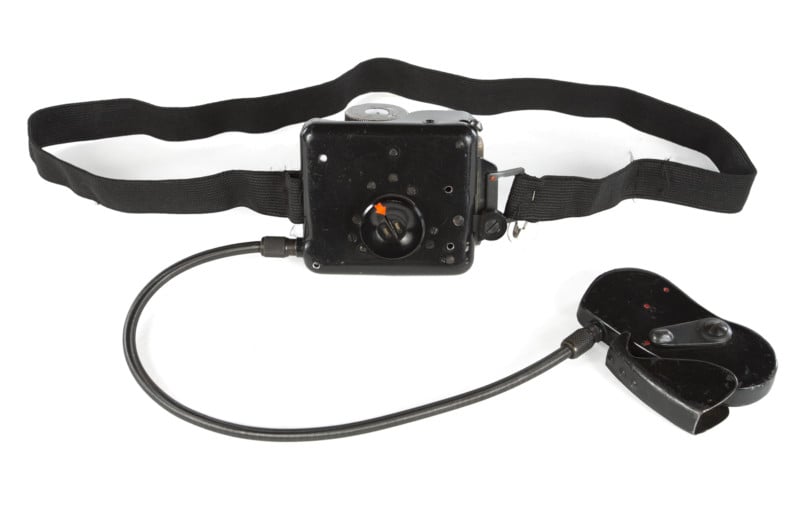 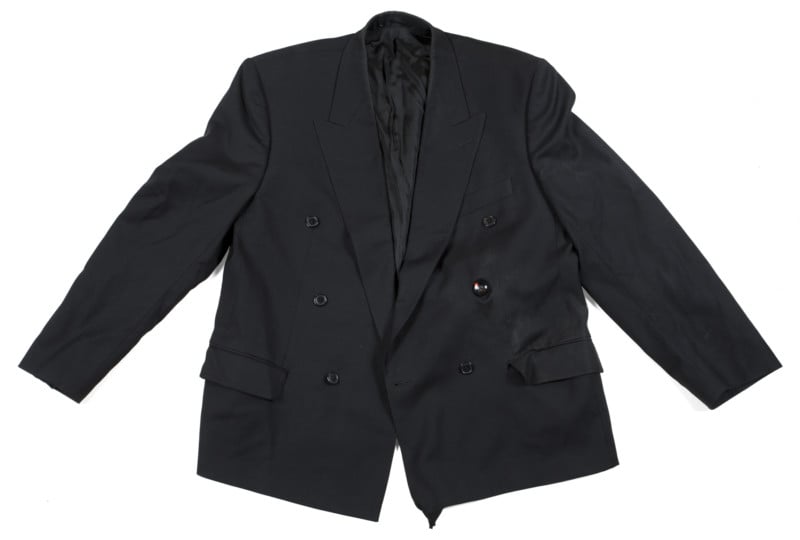 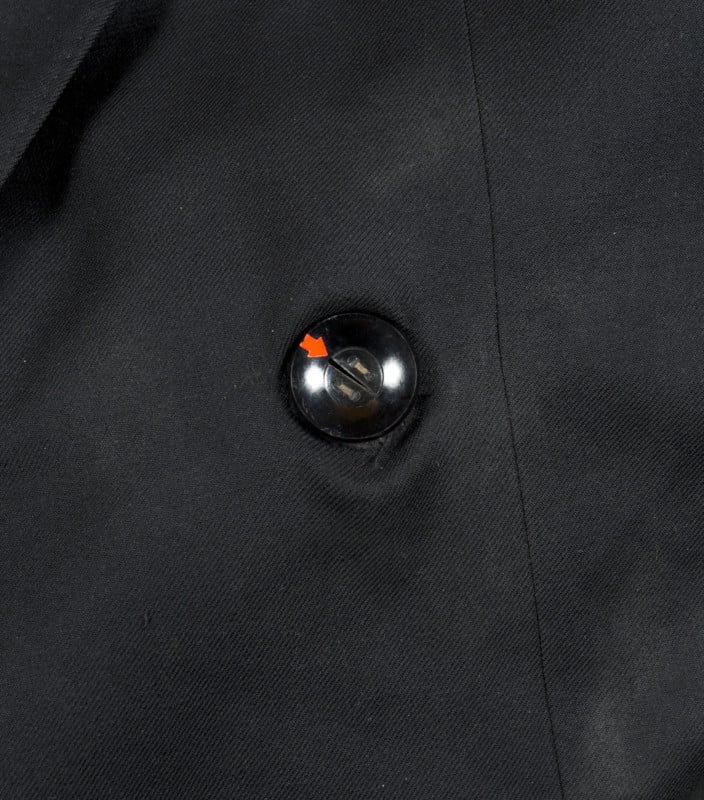 The camera seen below is the TOCHKA-59 “in tie” camera, which was used by KGB agents to capture photos during clandestine missions. The camera was strapped around the waist and pointed through the tie which had an optic that was hidden by a transparent tie pin. The operator had to be very experienced with the camera in order to capture anything usable, as they not only required good lighting but also had to be properly distanced and the photographer had to account for some correction of angles. 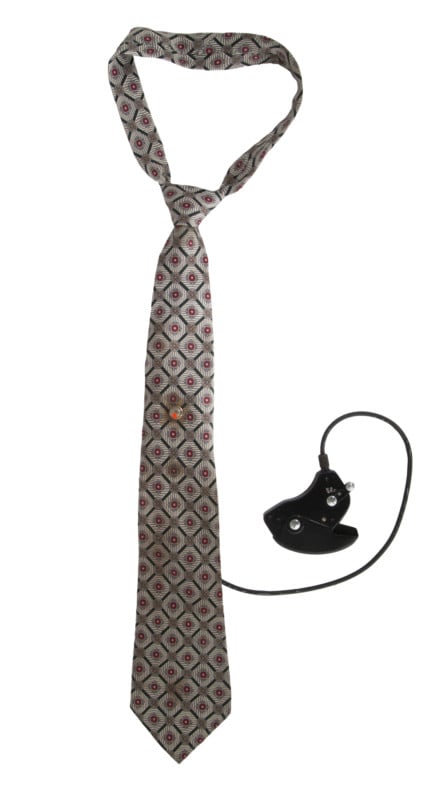 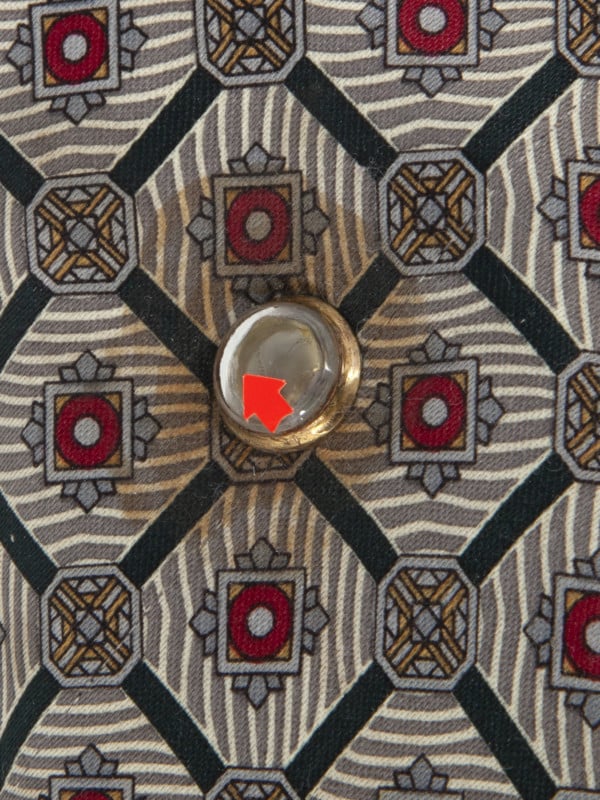 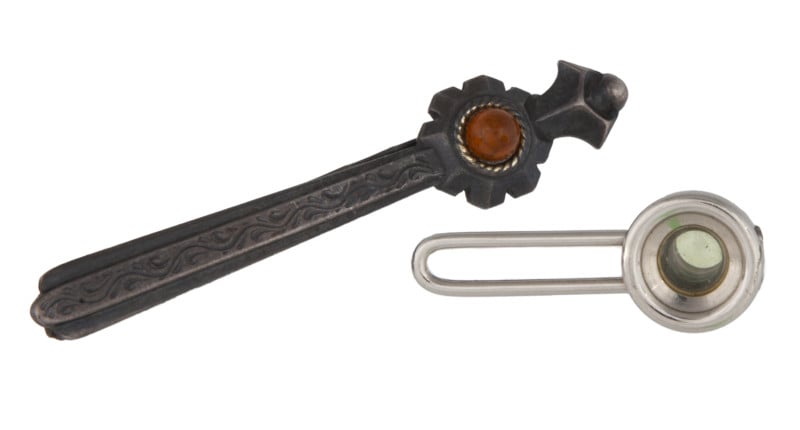 Apparently, the agents would make fake cough sounds or scrape their shoes to hide the sound of the shutter clicking.

In addition to on-person devices like these, there also other cameras that were hidden in different kinds of bags. The one below is a “Doctor’s” bag that contains a hidden camera with a lens that can be pointed outside a moveable section on the underside of the bag. 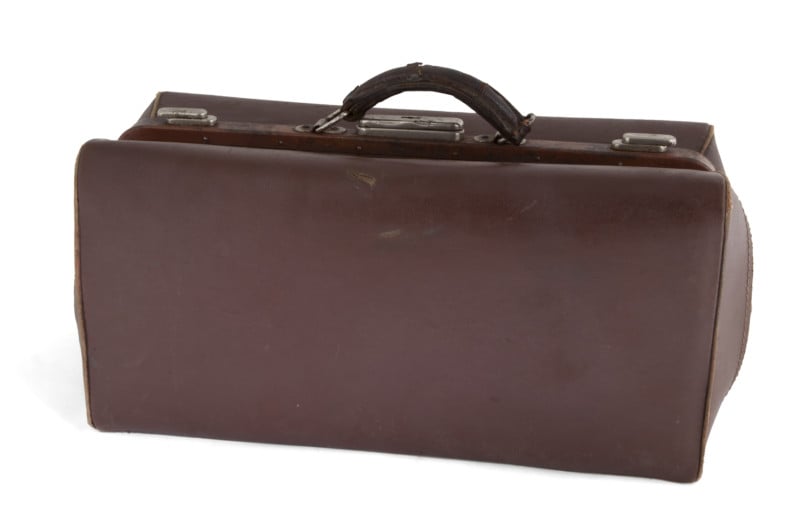 As the lens pointed downwards, this camera was used mainly to capture photos of documents. The device in the briefcase, which has two batteries, guarantees that documents are lit so that the camera inside would be able to correctly expose its images. Through a set of specialized hardware that projected the image onto matte glass, the photographer was able to properly see what he was photographing to assure everything was in frame.

The camera is equipped with a copying device Yolka lens, which allowed images to be captured at a short distance since macro lenses did not yet exist. 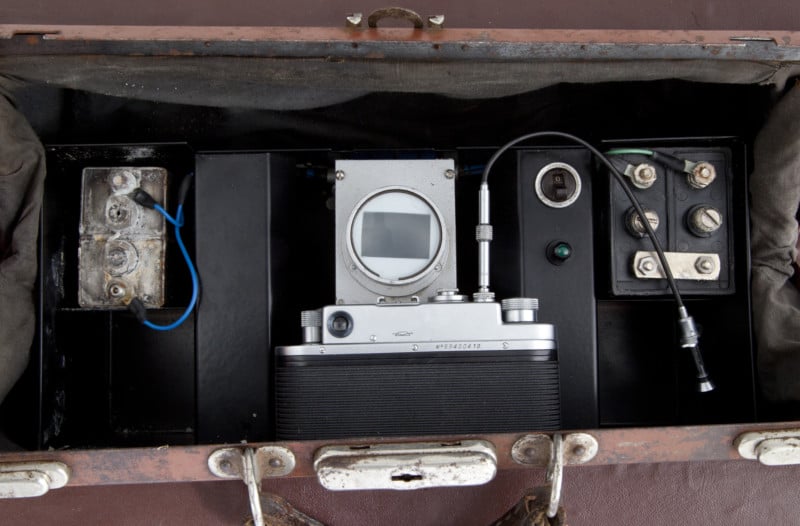 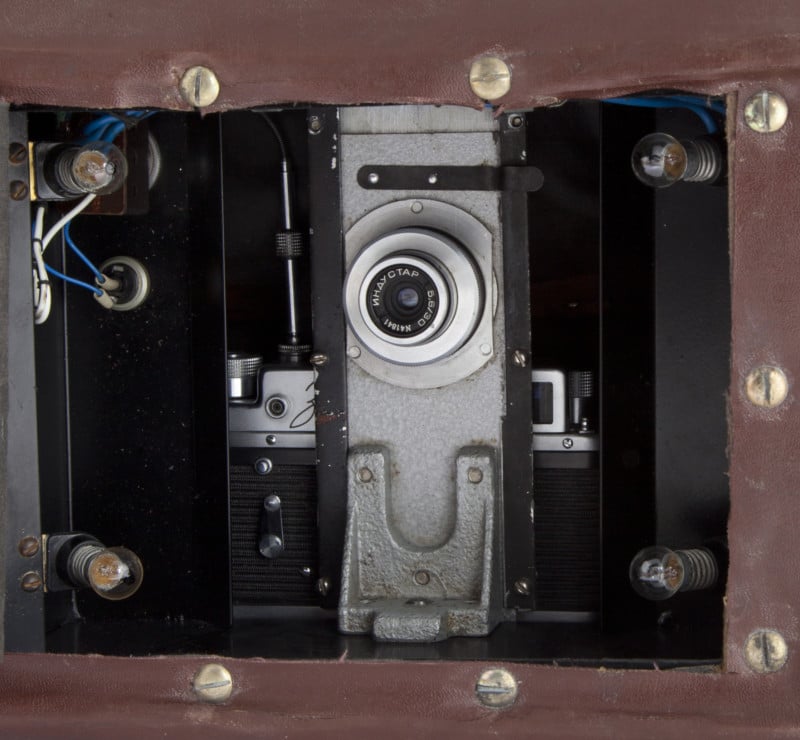 In that same vein is this purse camera which is equipped with a FED camera, which were copied from Leica and as such produced very high-quality photos for the time. 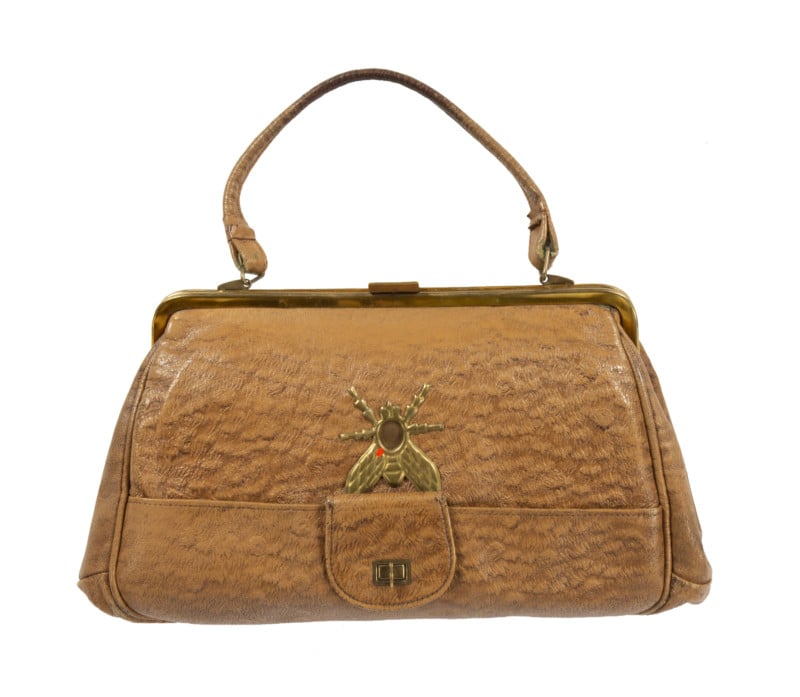 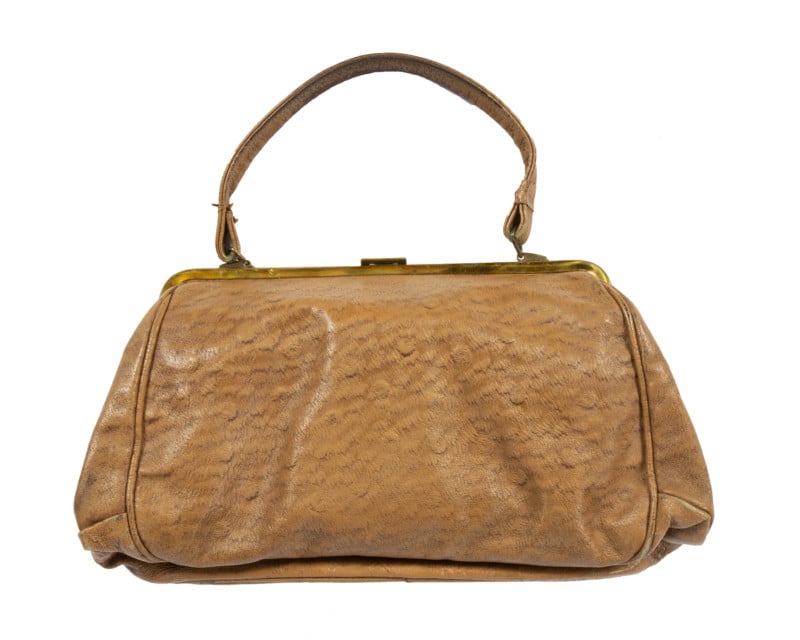 According to the description, the inside of the bag holds a surprisingly complex mechanism. When you push a button near the zipper, a window opened in the middle of the zipper to take a picture. The FED camera did not have an auto film scroller. so the agent had to push the button at the side to prepare the device for a second capture. The inner lining of the bag is also sound absorbant to prevent the shutter click from giving the agent away. 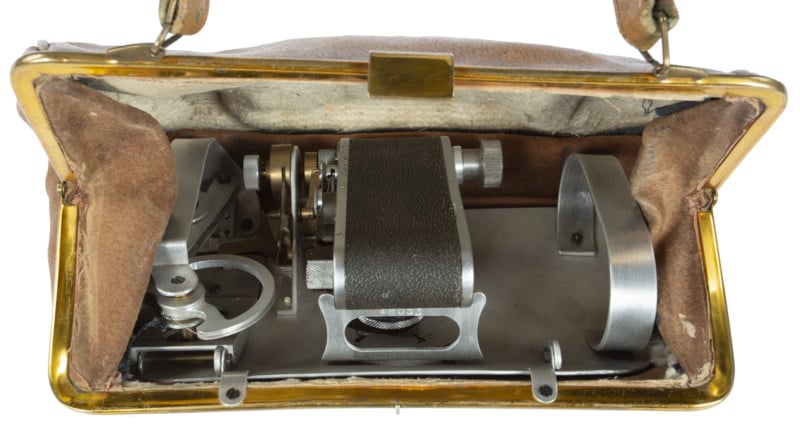 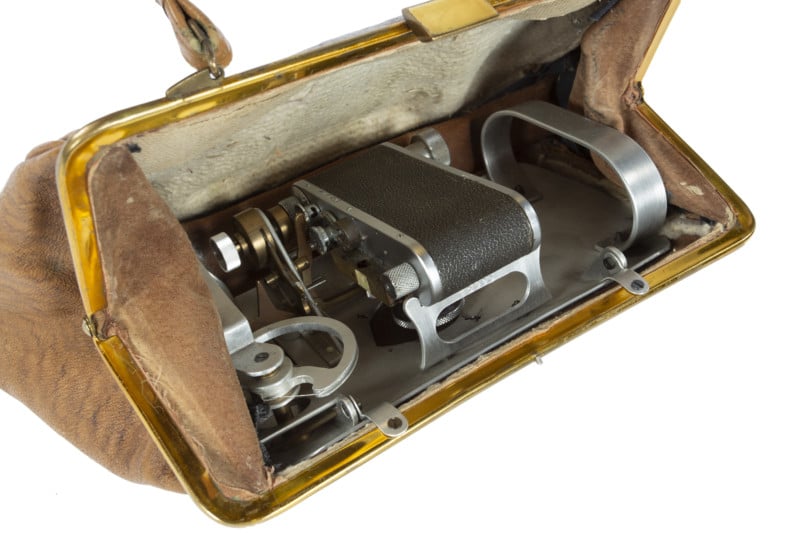 There are several other examples of different hidden cameras that run the gamut of hidden compartments. For example, below is a book that contained a Neozit camera. The lens could be operated through a small moveable section on the cover. This is just one of several book cameras that are up for auction. 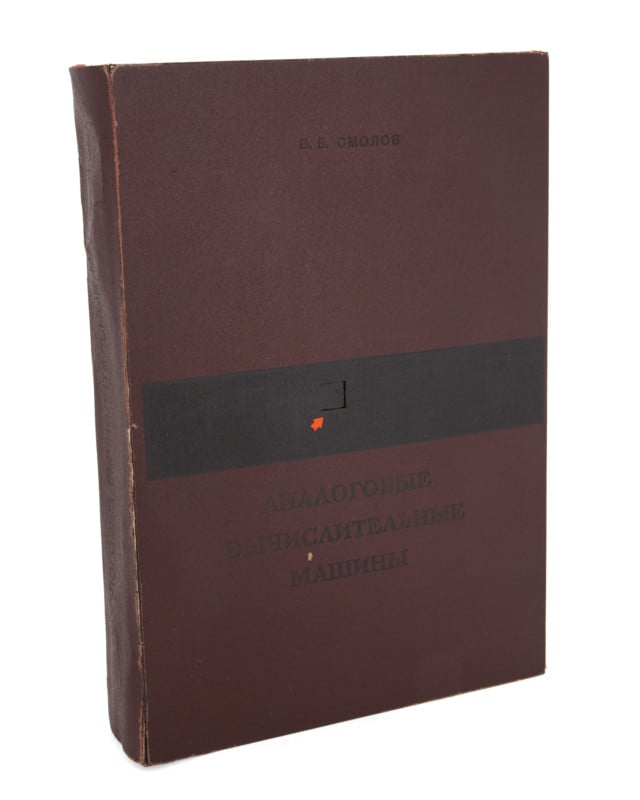 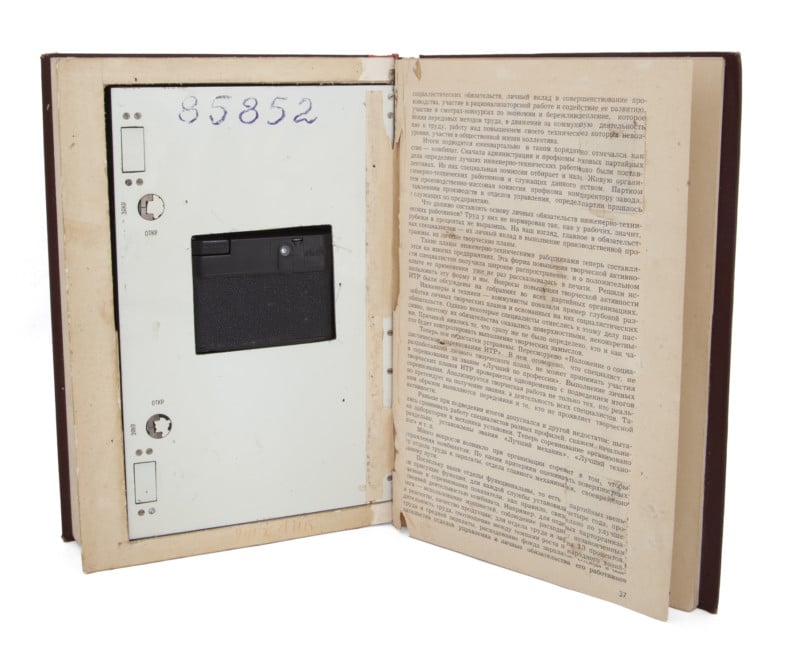 Below is a particularly advanced camera for the time: a Russian FSB spy birdhouse with a hidden digital video camera. It was equipped with state-of-the-art video monitoring equipment that could remotely transmit video signals short distances. 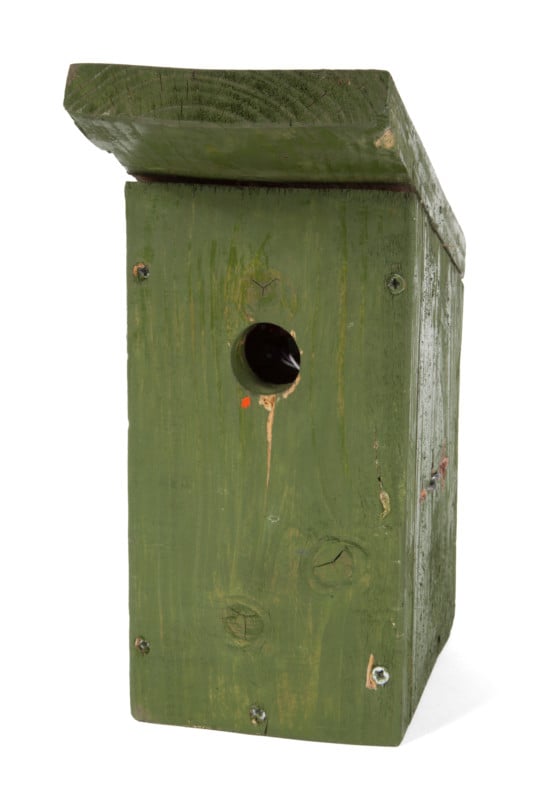 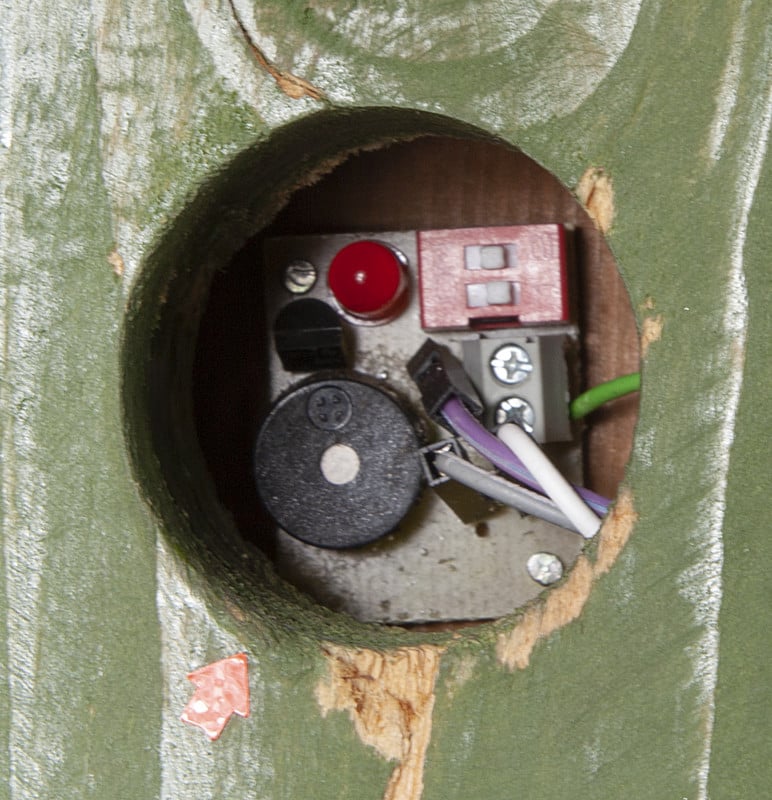 The full catalog, which can be viewed online, is a treasure trove of clandestine camera equipment. The auction for these items, many of which are not set to be sold for particularly high prices, is set for both in-person and live online bidding on February 13. The first session takes place at 10 AM Pacific Time, with the second session starting at 1 PM Pacific Time.

You can register for the auction at juliensauctions.com.

While the items shown above are exclusively Russian KGB tools, many similar techniques were adopted by the CIA during the same period. You can learn more about some of the more interesting camera tools from the other side of the Cold War here.

Watch Snowflakes Melt in Reverse in This Detail-Rich Macro Video