Plastic seems like an unavoidable part of modern life in the U.S. Therefore, it is extra important to separate the “good” plastics from the ones that can leach harmful chemicals like BPA, BPS, phthalates, xenoestrogens, dioxins, furans, mercury, lead and antimony into food, beverages and the environment.

These toxic chemicals—found in the majority of plastic, PVC and vinyl items produced today—have been linked to obesity, enlarged male breasts, earlier puberty in girls, and increased incidence of breast, prostate and other cancers. In fact, they are so toxic, many plastic additives have been banned in Europe, Canada, China, and an increasing number of cities and states in the U.S.

One of the best things you can do for your health, especially if you are wrestling with a chronic condition, is to eliminate as much plastic from coming into contact with your body as possible.

Most of us know by now to avoid toxic, BPA-ridden plastic beverage bottles, plastic food storageware, plastic wrap and resealable (or zipper-lock) food storage bags. (If you didn’t know that, now you do!)

But, plastic is everywhere, so toxins can be found in the places you might not know about, like:

One way to sort out which plastics are safer than others is by checking the Plastic ID Code on the bottom of the item, which is that little number inside the triangle that tells you if you can recycle it.

What Do The Numbers on Plastic Containers Mean?

PET is used for water and soft drink bottles, mouthwash bottles, containers for condiments like nut butters and ketchup, and TV dinner trays. PET is considered safe, but it can actually leach the toxic metal antimony, which is used during its manufacture.

One study that looked at 63 brands of bottled water produced in Europe and Canada found concentrations of antimony that were more than 100 times the typical level found in clean groundwater (2 parts per trillion).

Brominated compounds have also been found to leach into PET bottles. Bromine displaces iodine in the body, and is a central nervous system depressant. It can accumulate over time, and trigger paranoia and other psychotic symptoms. Avoid if you can.

HDPE is used in butter tubs, milk jugs, juice, household cleaner and shampoo bottles, as well as cereal box liners and grocery bags. It is often considered a low-toxin plastic, but like almost all plastics, it has been found to release estrogenic chemicals.

In one study, 95 percent of all plastic products tested were positive for estrogenic activity. This means they can disrupt your hormones and even alter the development of your cells, which puts infants and children at even greater risk. In this particular study, even HDPE products that were free of bisphenol-A (BPA) still tested positive for other estrogenic chemicals. Use with caution.

PVC contains numerous toxic chemicals including lead and DEHP, a type of phthalate used as a plastics softener. As if the lead weren’t bad enough, phthalates are considered “gender-bending” chemicals which cause the males of many species to become more female. These chemicals disrupt the endocrine systems of wildlife, causing testicular cancer, genital deformations, low sperm counts and infertility in a number of species, including polar bears, deer, whales, otters, and frogs, among others.

Scientists believe phthalates cause similar harmful effects in humans. If your home has flexible vinyl flooring, or those padded playmat floors for kids (often used in day cares and kindergartens, too), there’s a good chance it is made from PVC. PVC flooring has also been linked to chronic diseases like allergies, asthma and autism.

PVC is one of the worst health and environmental offenders. Avoid at all costs.

LDPE is considered to be low-toxin plastic and it is used in bread bags, produce bags, squeezable bottles as well as coated paper milk cartons and hot/cold beverage cups. While LDPE does not contain BPA, it can leach estrogenic chemicals, much like HDPE. Use with caution.

Polypropylene is used in straws, yogurt containers, and syrup, ketchup, and medicine bottles. While polypropylene is considered a low-toxin plastic that is tolerant of heat, at least one study found that polypropylene plasticware used for laboratory studies did leach at least two chemicals. Use with caution.

Heating styrofoam or using it for hot foods and beverages makes it leach toxins even more, so try to avoid food and drinks in polystyrene containers at all costs, and definitely don’t use them in the microwave! Avoid at all costs.

#7 is a catch-all designation used to describe products made from other plastic resins not described above, or those made from a combination of plastics. While there are many different types of #7 plastics, the most common include 5-gallon-size water bottles, baby bottles and other polycarbonate plastics.

It’s difficult to know for sure what types of toxins may be in #7 plastics since they vary so much, but there’s a very good chance that if they are polycarbonates, they contain bisphenol-A (BPA), or the equally concerning chemical created to replace BPA, known as Bisphenol-S (BPS).

BPA and BPS are both endocrine disrupters that interfere with your body’s hormones, affecting your mood, growth and development, tissue function, metabolism, sexual function and ability to reproduce. Over 6 billion pounds of BPA are produced each year, so it is no wonder that the CDC found that 93% of Americans over the age of 6 have BPA in their urine and bloodstream!

Some of the greatest concern surrounds in-utero exposure to BPA and BPS, which can lead to chromosomal errors, spontaneous miscarriages and genetic damage. But evidence is also very strong that these chemicals are harming adults and children, too, causing decreased sperm quality, early puberty, stimulation of mammary gland development, disrupted reproductive cycles and ovarian dysfunction, cancer, and heart disease.

Research has found that “higher BPA exposure is associated with general and central obesity in the general adult population of the United States.” Another study found that BPA is associated not only with obesity, but also with insulin resistance, which is an underlying factor in many chronic diseases. Avoid at all costs.

Plastics are not only an issue for our health, but also for the health of plants and animals everywhere.

In spite of nationwide recycling efforts, we currently recycle only a measly five percent of the plastics we produce. And more and more cities are shutting down their plastic recycling programs because they are not cost effective! 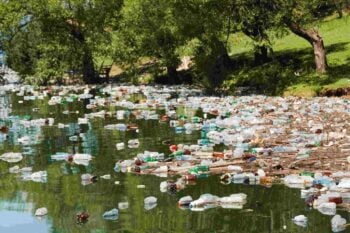 Approximately 50 percent of our plastic waste goes to landfills (where it will sit for thousands of years due to limited oxygen and lack of microorganisms to break it down). The remaining 45 percent ends up as litter in the environment where it ultimately washes out to sea, damaging marine ecosystems and entering the food chain. For example, 42% of the rivers tested in America turned up positive for Bisphenol-A or BPA.

Plastic Pollution in the Ocean

With at least eight million metric tons of plastic entering the world’s oceans every year, there is growing concern about the overwhelming proliferation of plastics in the environment. Eventually it all accumulates into massive, Texas-sized blobs of trash floating and spiraling in and out of the world’s oceanic gyres today.

A United Nations report claims there is an average of 46,000 pieces of plastic in every square mile of ocean. Today, you can be aboard a ship thousands of miles away from land, but you will see floating plastic debris everywhere.

Even in the most remote reaches of the planet, you will find plastic trash. We’ve turned our oceans into the largest landfill in the world, and we should be ashamed! 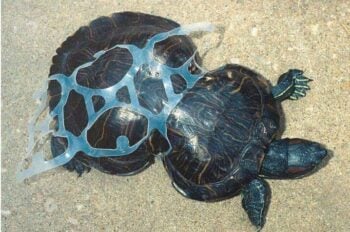 The scariest part is that all those floating plastic particles act like “sponges” for waterborne contaminants such as PCBs, pesticides like DDT, herbicides, and other persistent organic pollutants. This makes floating plastics even more dangerous than they are on land.

Filter-feeding marine animals ingest these plastic particles and the toxins they contain, and subsequently pass them up through the food chain, and eventually to humans.

In fact, ninety percent of all seabird species, 22 percent of Cetaceans (whales, dolphins and porpoises), all sea turtles, and a growing list of fish have been found to be contaminated with plastic.

Tiny beads of plastic look like fish eggs or other food sources, so many sea creatures simply mistake them for food. Loggerhead sea turtles often confuse plastic bags with jellyfish, their favorite food. The effects of this are disastrous, including internal blockages, dehydration, starvation, and often, death. 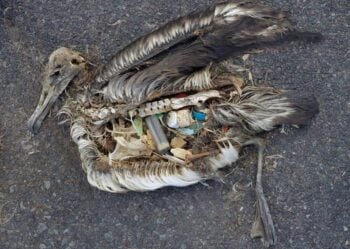 Sea birds are frequently found strangled by the plastic rings that hold six-packs of soda together, or starved by stomachs full of plastic debris. Other creatures meet a painful end by getting tangled up in plastic netting.

Floating plastic debris also blocks the sunlight that sustains plankton and algae, and because plankton and algae are the foundation of the marine ecosystem, this has an enormous effects up the food chain. In some ocean waters, plastic outnumbers plankton by a factor of six to one.

There is no feasible or affordable way to clean the plastic out of the ocean. The ocean is far too violent and vast for that. The only thing we can do is clean up the beaches once all that plastic eventually washes up on them. (And because of natural ocean cycles, it eventually will.)

But if we want to really clean up our mess, the most effective, cheapest strategy is to prevent the plastic from getting there in the first place!

The heavy toxic burdens associated with plastic—at every stage of its life cycle—make it clear why reducing and phasing out the production of plastics is the only way forward.

At every stage of its lifecycle, plastic poses distinct risks to human health, arising from both exposure to plastic particles themselves and associated chemicals. People worldwide are exposed at multiple stages of this lifecycle:

The risks to human health start before plastic even makes it onto store shelves, which is yet another reason why recycling and waste management efforts alone can’t reverse this crisis. We need companies to take responsibility for plastic’s effects on our health and the environment, and immediately move toward sustainable alternatives before it’s too late.

25 Ways to Use Less Plastic

It is very possible to get most of the plastic out of your life—especially the disposable plastic. (Though durable goods like computers and car parts will be the exception). Start with the low hanging fruit first, like buying your eggs in cardboard instead of polystyrene. Then consider taking on just one or two of the bigger changes a month.

Here are some suggestions for reducing both your use of plastic and your exposure to its toxins:

What other ways have you reduced the plastic in your life? Please comment below!

This article was excerpted from my book Sustainability Starts at Home – How to Save Money While Saving the Planet. For more money-saving, planet-friendly tips, check out the book by clicking below.

An online shop is standing out for its use of funny and unconventional phrases that resonate with many Latinos, and